Great news on the downtown Boston market. A repost of Jenifer’s article below:

MAY 01, 2013Boston’s downtown condominium market thrived during the first three months of the year, with tight inventory helping to push the median price to a quarterly record of $537,000, data to be released Wednesday show.

First-quarter sales of downtown condos totaled 505, marking an 8.4 percent sales increase compared with the same time last year and the highest number of sales since 2007, according to the Boston company LINK, which tracks the market.

The median sale price of $537,000 was 7.4 percent higher than during the first three months of 2012, LINK reported. The second-highest quarterly watermark was in the fourth quarter of 2012 when the median price hit $525,000, said Debra Taylor Blair, LINK president.

“Sales are up and appreciation is up,” Taylor Blair said.

The numbers reflect what many in the real estate industry have been saying for months: Prospective buyers are fighting for available homes, pushing up prices, and causing bidding wars in the city’s more popular neighborhoods. 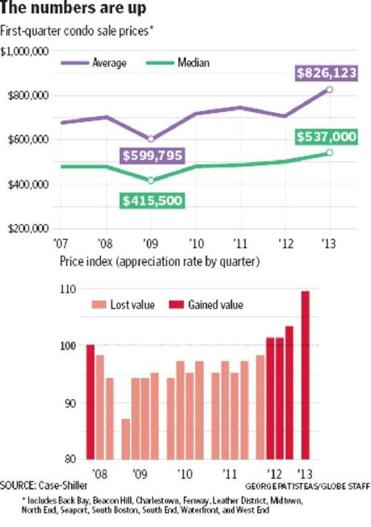 The city’s luxury condos — which include concierge and valet services among other amenities — appear to be even more more coveted.

The median sale price for luxury condos rose to $1.4 million during the first three months of 2013, a 22.7 percent increase compared with the same time last year, LINK said.

Taylor Blair said Wednesday’s report includes a new LINK definition of luxury buildings — it only includes properties that offer deeded parking or a valet service and are valued at more than $650 per square foot. The change effectively boosts the average and median home prices in the luxury market in comparison with past reports.

“When they hear the word ‘luxury,’ they assume luxury means, ‘I have a place to park my car,’ ” Taylor Blair said.

LINK also limits its report to 12 Boston neighborhoods, including the Back Bay, Beacon Hill, the Fenway, and South Boston. It excludes sales in Jamaica Plain, Allston, Roxbury, and Mattapan, among other areas.

Boston’s downtown condo market was largely unscathed by the national housing decline that started in 2005.

But the higher-cost area was affected by the 2008 economic crisis, which slowed sales and depressed prices.

Now, the relatively small number of homes on the market — combined with low mortgage rates and an improving economy — is causing prices to rise. There were only 291 downtown condo units for sale in March compared with 693 in March 2012, according to LINK.

John Ranco, a senior sales associate at Hammond Residential Real Estate in the South End, said more people are listing their homes for sale, but don’t expect them to be on the market for long.

“Between now and July is when we see the best selection,” he said.

Another report released Tuesday added to growing evidence that the US housing industry is improving.

The S&P/Case-Shiller Home Price Indices showed the value of a single-family home in the Boston area increased by 5.2 percent in February compared with that month last year.

Nationwide, home values increased even more in February — by 9.3 percent — in the 20 cities covered by Case-Shiller, which tracks repeat home sales. It was the second month in a row that all 20 cities showed price increases compared with the year before, Case-Shiller reported.

“Housing continues to be one of the brighter spots in the economy,’’ said David M. Blitzer, chairman of the index committee at S&P Dow Jones Indices.