The difference between the biggest winners and losers when it comes to home prices across Massachusetts can be summed up in a single word: jobs.

Cambridge and nearby cities and suburbs dominated the 2014 list of the top ten gainers in home values over the past decade, reports The Warren Group, publisher of Banker & Tradesman.

The epi-center of the tech and life sciences boom, Cambridge led the way with an 80 percent increase in its median home price since 2005, which hit a lofty $1.2 million in 2014.

By contrast, the top 10 losers in value were all beyond the 128 and 495 beltways in economically struggling parts of the state, distant from the wealth and jobs of Greater Boston and Cambridge.

“Proximity to good jobs seems to be the common thread among the top communities,” Timothy M. Warren Jr., chief of The Warren Group, said in a press release. “Location matters in real estate, and here we see these key communities adding even more in terms of their home values.”

No. 3 was Lexington, at $950,000 after a 34 percent hike, and it’s practically next door to Cambridge and Somerville, separated only by high-flying Arlington.

By contrast, hard-hit old industrial towns and cities along Route 2 in North Central Massachusetts took the biggest hits to their home values.

Athol led the way down with a 36 percent plunge that lowered its median price to $115,000, followed by Fitchburg, Orange, and Gardner.

Three towns from Central Massachusetts also made the losers list: Warren (No. 4), Southbridge (No. 3), and Barre (No. 8).

Rounding off the list were Randolph, the only town in Greater Boston to make the list of the biggest decliners, and New Bedford.

However, rock bottom prices for homes and other real estate could provide some of the ingredients for a comeback for these communities as well, Warren noted.

“In order for prices to rebound, an economic revitalization in these areas needs to occur,” he said. “With low-cost housing abundant, these communities should be able to attract business relocations and start-ups.”

Leading the pack is likely to be the new Four Seasons Tower, which could see its three, gold-plated penthouses on its 61st floor each fetch upwards of $20 million, according to preliminary price estimates.

That means the Back Bay tower’s top floor may reap a total of $60 million to $70 million in sales. That figure would dwarf the $37.5 million that the 60-story Millennium Tower — now under construction in Downtown Crossing — is seeking for its top floor penthouse suite.

Construction recently kicked off on the $750 million Four Seasons tower taking shape near the Christian Science Plaza, with an opening day pegged for 2017. It will be Boston’s tallest residential building.

“This is absolutely like nothing Boston has ever seen before,” said downtown Boston broker Tracy Campion, whose Campion & Co. is selling the Four Seasons condos. “I am absolutely sure they will set records.”

So what exactly will it cost to buy one of the two-story penthouses that will crown the new tower?

Campion declined to offer up an official pricetag but indicated that a “ballpark” estimate of $3,000 per square foot was not off the mark.

Other brokers not connected with the new tower offered similar price estimates for the Four Season condos of roughly $2,500 to $3,000 a square foot.

With each unit offering 8,000 square feet of living space atop Boston, that would put the penthouses in the $24 million range.

That’s practically double the previous price record set by a condo at the posh Mandarin Oriental, also in the Back Bay, which fetched $13 million.

The Four Seasons penthouses will have a number of features — for instance, a “huge” staircase, an elevator that opens into the unit, 14-foot high ceilings — that will likely make them a hot item, especially among the deep-pocketed international investors who have begun to flood the Boston market.

And while the prices are likely to come as a shock to the Boston area, jet-setting buyers used to stratospheric New York and London values are not likely to bat an eyebrow, brokers say.

“We are not used to those numbers but those are numbers we are going to start to see,” notes David Crowley, director of sales and marketing at Raveis Marketing Group. “They are building these properties to appeal not necessarily to a local market, but to international buyers and investors.”

“International tastes are driving a lot of the finishes, layouts and amenities,” Crowley added.

The blizzards howling, the wind chill is below zero – but that didn’t stop two gorgeous $1M + homes from closing in early February. The pictures below certainly help take the chill away! 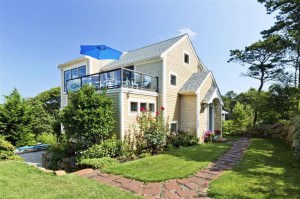 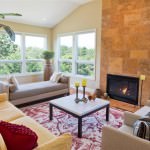 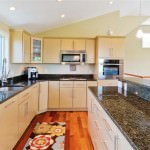 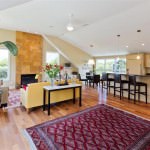 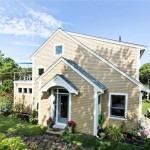 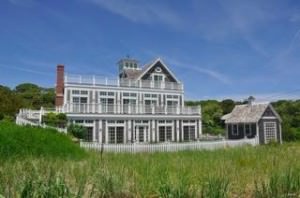 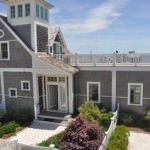 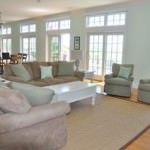 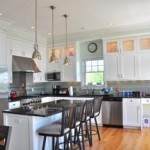 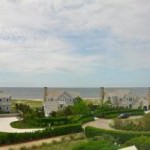 View all properties available on Beachfront-Realty.com.

January performance in line with previous year despite blizzard

Two men walk along the middle of Jones Road in Falmouth during the Jan. 27 blizzard. Despite the weather’s effects, property sales on the Cape were solid in January, the Barnstable County Registry of Deeds reported Friday. Ron Schloerb/Cape Cod Times

By Bryan Lantz
[email protected]
BARNSTABLE – The Cape’s real estate sales for January may have gotten partially buried in snow, but the market’s performance remained solid.
The Barnstable County Registry of Deeds reported Friday that sales volume last month was nearly identical to January 2014. The median price last month was down slightly less than a percentage point. Register of Deeds John F. Meade said those results came in a month when harsh winter weather limited activity to close sales.”The last two weeks are typically the busiest time of the month,” Meade said. “The snowpocalypse didn’t help much.”When a blizzard struck in the last week of the month, weather forced the registry to close on Jan. 27 and 28. “On Thursday (Jan. 29), we were open, but really no one was coming out to close transactions,” Meade said.
For the month, the registry recorded 396 deeds of property valued at more than $50,000, one fewer than in January 2013. The median price receded from January 2014’s $328,000 to $325,000 last month, the registry reported. The beginning of the year is typically the slowest time for property sales, Meade said. “January and February are the quietest months,” he said. “But we did have a strong December.”
Though weather may have prevented closings late in the month, both residential and commercial agents said the market has been robust. “It’s like an April market in the middle of a snowstorm,” said Tom Hester, principal of Tom Hester Real Estate in Dennis. “The phone’s been ringing a lot this winter.” Hester said low interest rates have provided a strong incentive for buyers to finance home sales. And he said both interest in both first and second homes has been strong this winter
Meade also said that interest rates were bringing more activity to the registry. Mortgage activity was up almost 2 percent, he said, as rates have reached multi-year lows.
On the commercial real estate front, John Ciluzzi, president of Premier Commercial in Hyannis, described conditions as “bullish.””The first quarter of 2015 has proved to be pretty good,” he said. “We’ve seen strong sales and leasing in January. There’s been a lot of interest, which we gauge as actual offers and money placed into escrow. When you get conditions like this, it’s why I say I’m bullish about the market.”
While the registry covers sales, Ciluzzi pointed out that another key part of the Cape’s commercial landscape also has been performing well: leasing. “That’s really the origination of new businesses,” he said. “Right now, we see a lot of leases in the office, retail and medical sectors.
And a look at a broader time span shows the real estate market continuing to improve, Meade said. “Six months to a year gives a better tell about where things are going,” he said. “And that looks like we’re on pace for continuing slight improvement.
The registry also reported that January was the 10th consecutive month with a median Cape sales price above $300,000.

Sure, Back Bay and Downtown Crossing may have all the new towers, but when it comes to overall development activity, South Boston is arguably the epicenter of the city’s development boom.

Southie currently has 42 projects either in the planning or approval stage, under construction, or recently opened. Most feature or include new apartment rentals, townhomes, or condos, according to the Boston Redevelopment Authority’s map of the Hub’s development scene.

The developments range from converted churches to brand spanking new buildings. The luxury West Square development at 320 D Street, which is still under construction, includes 259 apartments and 143 parking spaces.

If you throw in another 22 projects happening in the South Boston Waterfront, including the multibillion-dollar Seaport Square development , the number rises to 64 – three times or more than any other city neighborhood.

Not that super hot neighborhoods like the Back Bay (11 projects) and South End (19 projects), are any slouches either.

Back Bay and neighboring Downtown include plans for the three poshest and tallest towers even built in Boston: one still in the planning in Copley Square, and construction underway at the 61-story Four Seasons Tower and the 60-storyMillennium Tower.

“There has been a big shift in our city,” said Tracy Campion of Campion & Co., the brokerage in charge of the building’s sales. “Back Bay and Beacon Hill are bursting out of their seams.”

Other neighborhoods are also seeing a big surge in development.

East Boston may now be one of the hottest new neighborhoods in terms of big projects outside of South Boston.

A trio of grand waterfront developments is in the works for the neighborhood’s once hardscrabble waterfront, including 400 new apartments and condos at Clippership Wharf.

Charlestown’s real estate market heated up a couple decades ago, much like Eastie’s is doing now. The Charlestown boom continues, with plans for 85 new residential units and public space on the first floor at Pier 5.

Fenway is another neighborhood in the middle of a dramatic transformation, from a gritty student alcove to one of the more exciting places to live in the city.

With building sites scarce in the densely packed neighborhood, developers are pushing to span the Massachusetts Turnpike with ambitious air-rights projects.

Developer John Rosenthal is lining up financing for Fenway Center , a $550 million apartment and retail project proposed for an air-rights platform over the Massachusetts Turnpike by Fenway. Plans for Parcel 7 air-rights include a seven-story residential building and a 22-story residential and office tower.

Near the Hynes Convention Center and the Berklee College of Music, New York-based Peebles Corp. is pushing plans for a $330 million air-rights project at Parcel 13, including 88 condos, a hotel and shops.

Often overlooked, Dorchester now has 20 major projects in the works, including a proposal for for 275 residential units and 143 parking spaces at 25 Morrissey Boulevard by the JFK/UMass T station, while St. Kevin’s redevelopment, now underway, features 80 affordable units.

Brighton has 21, including 1505 Commonwealth Ave., a proposal to convert an office building into 85 residential units. Allston’s 15 projects include a new proposal for 87 apartments, ground floor retail, and 66 parking spaces at 37-43 North Beacon Street.

Meanwhile, Roxbury has 20 big projects in the pipeline, a number that includes 102 residential units in two buildings in the first phase of Bartlett Place , along with 16,839 square feet of commercial space and a garage with 130 spaces. When the build out is complete, the entire development will have 323 residences.

Last but not least, Jamaica Plain has 16 new projects, including The Commons at Forest Hills Station, which calls for 283 new residential units at the former Hughes Oil site. Demolition work began last fall.

Snow Snow and more snow…but that didnt slow down the Provincetown real estate market in January. 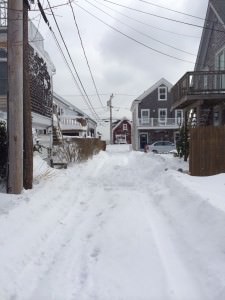 Twelve condos sold in January, most sold in the popular mid market price range of $500K to $800K. Six of them are pictured below.

Whats up for February? 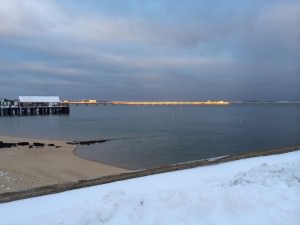 Many of you have seen The Goode and Farmer 2014 year end report which I recently posted. Below are some market  highlights of our  2014 business which is representative of the market as a whole in Provincetown with a natural focus on the popular mid market. 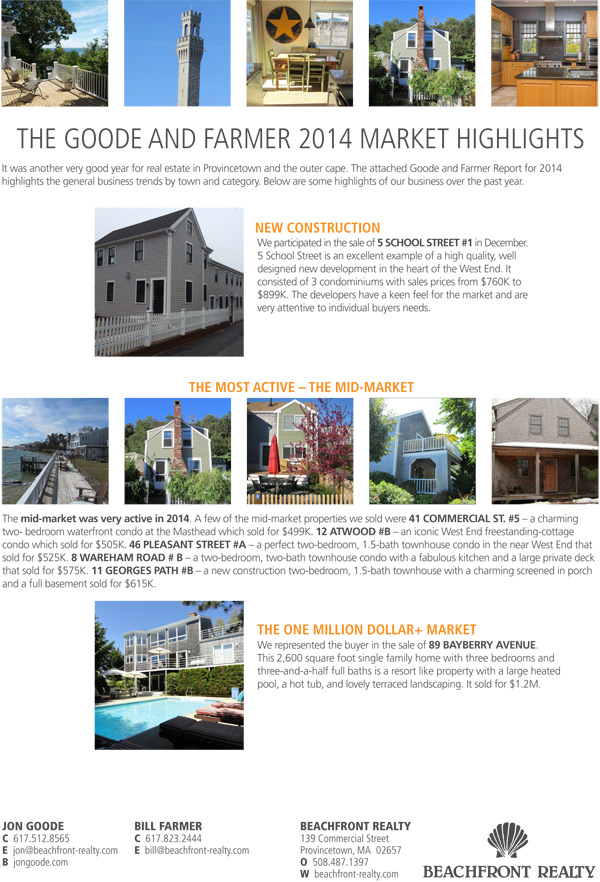