February was a strong month for real estate. The Cape was effected by 4 weekend snow storms but Boston buyers scoffed at the weather and added momentum to sales in the New Year.

Existing-home sales and prices posted strong year-over-year gains in February, while inventory remained tight but eased slightly, according to a monthly report released today by the National Association of Realtors (NAR).

Existing homes, which include single-family, townhomes, condominiums and co-ops, sold at a seasonally adjusted annual rate of 4.98 million during February, up 0.8 percent from January and 10.2 percent from a year ago. That’s the fastest pace of sales since November 2009 when the first-time homebuyer tax credit boosted purchases.

The national median existing-home price remained level at $173,600 from January but was up 11.6 percent from a year ago, continuing a 12-month string of consecutive year-over-year price increases not seen since May 2006.

Existing-home inventory rose 9.6 percent from January to 1.94 million units in February but remained tight, at 19.2 percent below the inventory level from a year ago.

With the month-over-month growth, the months’ supply of inventory — the amount of time it would take to sell all homes now on the market at the current rate of sales — rose to 4.7 months, up from 4.2 months in January.

Some analysts view a six-month supply of homes as a more even balance of buyer and seller demand — anything less than that indicates a seller’s market.

NAR Chief Economist Lawrence Yun said that overall economy is resulting in increased demand, sales and prices. Despite rising prices, however, low mortgage rates are still attracting homebuyers, but tight inventory, he said, will continue to temper the housing turnaround.

“The only headwinds (to a housing a recovery) are limited housing inventory, which varies greatly around the country, and credit conditions that remain too restrictive,” Yun said in a statement.

Existing homes were on the market for a median of 74 days in February — up from 71 days in January and 24 percent below February 2012’s mark of 97 days.

First-time buyers accounted for 30 percent of purchases, unchanged from January.

Distressed homes accounted for 25 percent of all existing-home sales in February — down from 34 percent in February 2012 but up from January’s mark of 23 percent.

All regions saw year-over-year increases in existing-home sales with the South leading the way with a 14.9 percent jump in sales from a year ago to an annual rate of 2.01 million in February on a median sale price of $150,500.

The West saw February sales rise 1.7 percent from February 2012 to an annual rate of 1.20 million with extremely tight inventory and multiple bidding raising the median price, year-over-year, 22.7 percent to $237,700.

Another great post from Tara Steele at Agent Genius. Buying is still cheaper then renting in most markets. An interesting national story.

by Tara Steele in Housing News – March 19, 2013
Trulia reports that buying is cheaper than renting in most major metro areas, but tight lending conditions remain a challenge to housing’s recovery. Rents up, home prices up, one still reigns

According to the Trulia Winter 2013 Rent vs. Buy Report, buying a home in the top 100 major metros is cheaper than renting, even in light of home prices rising. The company analyzes homes for sale and rent on the site from December 1, 2012 to February 28, 2013 factoring in transaction costs, opportunity costs, and taxes to uncover that although rents and home prices are both rising, home ownership is still more affordable. Trulia says buying a home is 44 percent cheaper than renting nationwide, down just slightly from 46 percent in 2012.

“Although buying a home is still cheaper than renting, the gap is closing,” said Dr. Jed Kolko, Trulia’s Chief Economist. “In 2013, home prices should rise faster than rents, and mortgage rates are likely to rise in the next year as the economy improves. By next year, buying could be more expensive than renting in some housing markets, even for people with the best credit.”

Asking home prices rose 7.0 percent year over year in February, which outpaced rents which rose 3.2 percent in the same period. Trulia reports that low mortgage rates (averaging 3.5 percent at the end of February) have kept homeownership costs from rising, and kept affordability high.

“Even in each of the 100 largest metros, buying is more affordable than renting with the range differing significantly from being 70 percent cheaper to buy than rent in Detroit, but only 19 percent cheaper in San Francisco,” Trulia reports.

The challenge that remains for housing

While a positive portrait of homeownership emerging, the stark reality is that many potential home buyers still won’t qualify for a mortgage under current lending conditions, and those that do qualify may not enjoy the lowest of rates unless their credit is near perfect.

That said, Trulia notes that “getting a higher rate does not mean homeownership is completely out of reach. Even with a 5.5 percent mortgage rate, buying a home is still cheaper than renting in almost every market. Only in San Francisco does homeownership become slightly more expensive than renting at the higher rate.”

Gorgeous newly renovated home with pool in the near West End 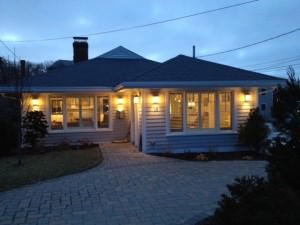 bungalow 58 has been totally renovated with exceptional attention to detail. This is a 2 bedroom 2.5 bath, 1,844 square foot  home with  a large family room and full bath on the lower level. 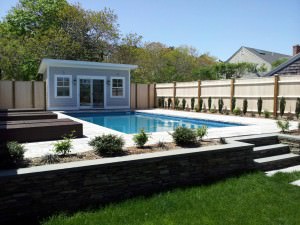 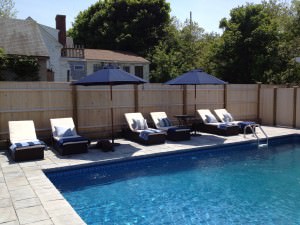 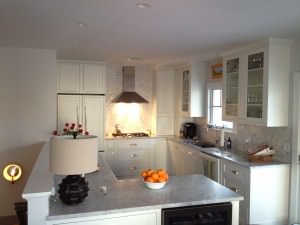 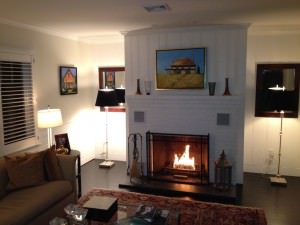 The kitchen has double Dacor wall ovens, a five burner gas cooktop, a built in Silhouette wine cooler, and Bianca Carrera marble counters. There is a separate dining area and a large living room with a fireplace. 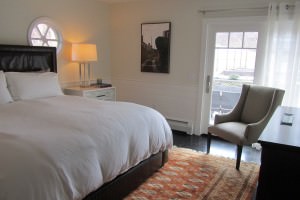 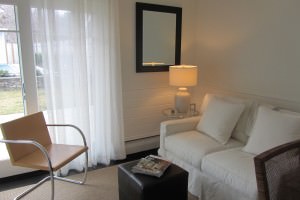 The master bedroom and the guest bedroom/den have sliders to the pool area. There is dyed oak hardwood throughout the main floor and and aged white oak hardwood in the family room.

bungalow 58 is located in the near West End , just a few minute walk from Commercial Street restaurants shopping and beaches. Give us a call and we will get you a full marketing package. bungalow 58 is being offered at $1.089M.

These two recent Truro sales represent an interesting and diverse segment of the Truro single family home market. New houses, one brand  new and one built in 2002 illustrate the quality of homes available and the  great value available in Truro . 6 Cooper sold at $446 per square foot while 56 Castle Road sold at $257 per square foot. I know that most buyers, sellers and agents on the Cape don’t often use per square foot price as an important indication of value, but I just cant stop myself from using as it was embedded in my city training.

6 Cooper Terrace a 3 bedroom 2 bath 2,048 sf house sold for $915K on February 25 . (from MLS) Enjoy privacy and views of Cape Cod Bay and the Hopper house from this outstanding, architect designed contemporary built in 2002. The great room with soaring windows, including living and dining areas with an open kitchen, is on the first floor. The first bedroom and bath are also on the first floor while the second bedroom and bath, as well as a sleeping loft overlooking the great room, are on the second floor. There is a screen porch and patio off the first floor, and a deck looking out to the bay off the second floor. There is also a large outdoor shower. This home has a four-bedroom septic and sits on 1.42 acres, ample acreage for a guest cottage and/or additional bedrooms in the house.

56 Castle Road a 4/3, 2,808 sf house sold for $722,500 on March 1. (from MLS) Spacious brand new contemporary in a terrific Castle Rd., location. This brand new home is well sited to afford nice privacy with lovely natural views and vistas of the marsh. Open airy feel to the main living level with vaulted ceiling and over sized sky lights.In addition there is a master bedroom with bath and an added guest room. Full social bath.Lower level has 2 additional bedrooms,huge family room with sliders for extra light and 1-1/2 baths.All living areas and bedrooms are generously sized. There is a very large wrap around deck for outside living. Great home for large families, friends and parties. Super rental potential!

One of our favorite properties that represents all that Provincetown has to offer. It is an authentic Cape Antique, with gardens, 3 bedrooms, privacy, charm, a separate cottage and the best location in the west end. 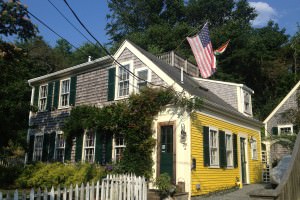 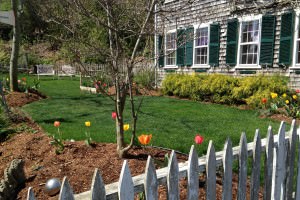 This single family home with an adorable separate cottage is one of those Provincetown properties that people just fall in love with. If you are seeking a sense of place just the approach to this house nestled on a private lane takes one back to another time. It is sited on the corner  of Tremont Street and Atwood Street, the most charming lane in the West End and is surrounded by wonderful perennial flower and vegetable gardens. This is a  3 bedroom, 2 bath home with a private detached cottage of 1 bed and 1 bath. 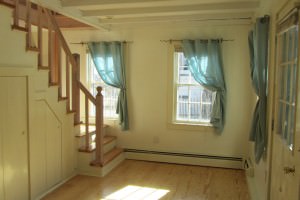 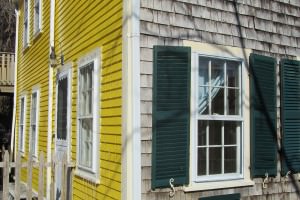 The The main floor of the house consists of a living room, two bedrooms, and a full bath, and is surrounded by a lovely fenced in yard with flower and vegetable gardens. 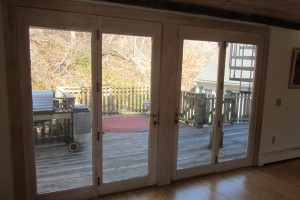 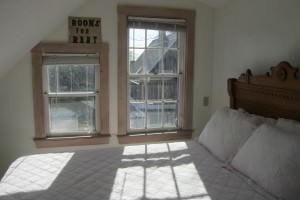 The second level has a kitchen, a family room, a separate dining room, a bedroom and a full bath. A full wall of sliders opens to a large deck with hot tub. A newly carpeted third bedroom completes this level. The kitchen has new appliances, and the entire house has new yellow pine hardwood floors. 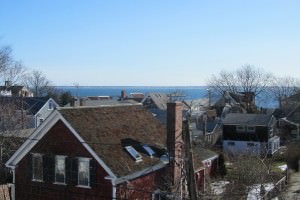 There is a large roof deck with views to the harbor, Long Point, the monument and Truro beyond. The decking and garden areas are charming and comfortable.  The large deck off the kitchen and family room is big enough for a dining table and also holds the built in hot tub. There is a private brick patio around the cottage. 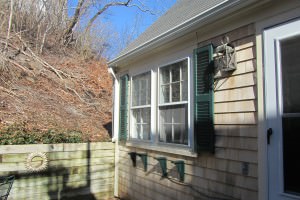 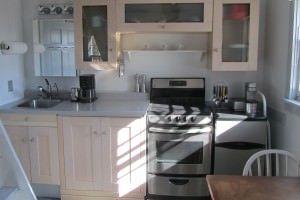 The adorable stand-alone cottage has a new kitchen, new carpeting and a sleeping loft, and is perfect for guests or as an artist’s studio. It is as comfortable as it is efficient.

This charming home is being offered at $1.295M.

This gorgeous 3 bedroom 3.5 bath home is nestled atop the highest point in Provincetown. Privately sited in the exclusive Telegraph Hill neighborhood this home provides the best of casual and  beach living along with the amenities that only a substantial home like this can. Telegraph Hill is a 5 minute walk in to the heart of the West End with all the shopping, restaurants and entertainment choices that Provincetown has to offer.

The entry to the home is down a curving driveway with steps up to a gently sloping yard that  surprises with its panoramic view of the water. 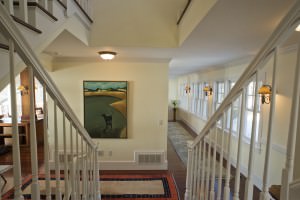 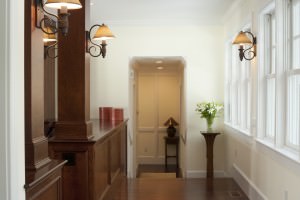 The sunlit entry gallery is 35 feet long and lined with windows with a dramatic open staircase up to the master suite and down to the garage and utilities below. 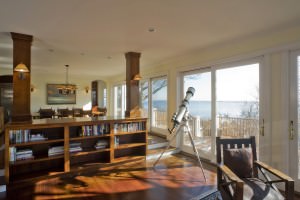 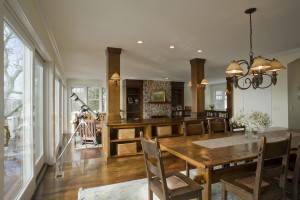 The living floor is dramatic as it’s full length is a wall of windows with open views of the bay and ocean beyond. There is a rich wood buffet separating the dining room and the living room with a floor to ceiling fieldstone fireplace. 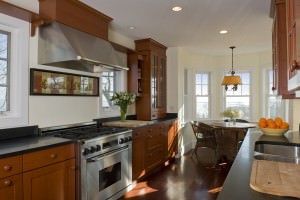 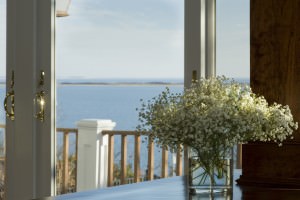 The chefs kitchen has delightful views to the water, a good sized pantry with a wine cooler and a sun filled dining nook that looks out over the water. 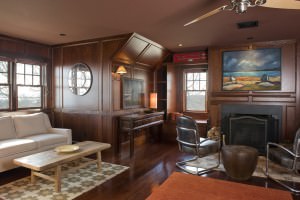 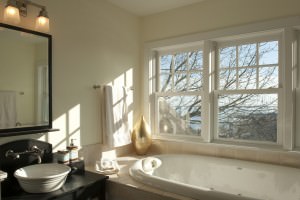 The master bedroom suite takes up the entire second floor and is utterly unbelievable. Modeled after a ship captains quarters, it has two sitting areas, and a large fieldstone fireplace. The master bath and dressing rooms are the epitome of luxury and comfort.

We are hosting an open house Saturday March 9 from 11-1. If you are in town please come by and say hello.