Another great curbed Comparison from Jazmine at Curbed.Com.

It’s time once again for Curbed Comparisons, where we break down what you can get at the same price point, style or size in five different Cape and Islands neighborhoods. This week, listings for around $1,500,000.

Here now, eight Cape Cod properties asking $1,500,000– year-round, on the beach, close to the beach, abutting the Cape Cod National Seashore, in the village, with an in-ground pool, Circa 1890, with fireplaces galore, recently PriceChopped, move-in ready, and ready to rent – with a little something for everyone.

POCASSET
Kicking off in Pocasset with a 6BD, 4.5BA water view estate consisting of a main residence and carriage house on 1.13 acres. Asking price is $1,495,000.
580 SHORE RD, POCASSET, MA
WEBSITE

WEST FALMOUTH
When we first wrote about this circa 1890 charmer on West Falmouth Harbor, a commenter asked, “Wouldn’t you love to see Grandpa’s face when you tell him the ol’ family cottage is now worth $2 mil smackers?” Alas, two chops later, the ask is down to $1,500,000.
8 RICE STREET, FALMOUTH, MA 02540
WEBSITE

HARWICH PORT
Once asking $1,895,000, this 3BD “in one of the most desirable neighborhoods in Harwich Port” is now hoping for $1,495,000. As for views and beach access, “step out to the front yard, look to your left and you see the ocean less than one tenth mile to Nantucket Sound.” So there’s that.
29 NEEL ROAD, HARWICH PORT, MA 02646
WEBSITE

TRURO
This tricked-out .78 acres spread “on a hill abutting the Cape Cod National Seashore” features an in-ground pool, perennial gardens and a 3BD with a screened-in porch with a built-in grill and hot tub. A $255K pricechop in early May brought the ask down to $1,495,000.
1 NELSON DRIVE, TRURO, MA 02655
WEBSITE

65 Bayberry Avenue just came on the market.  Certainly one of the most substantial properties in Provincetown. It has three bedrooms, four baths and 4,182 square feet.  It is being marketed for $2.75M. 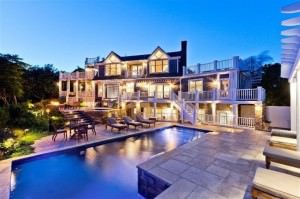 MLS COPY: Your private resort is steps to Commercial Street and sited beautifully with mature landscaping that’s impeccably maintained. Exceptionally renovated with custom craftsmanship , this home provides 3 levels of living each with walls of glass with decks leading to a custom pool/spa area with granite patio, lounging deck, outdoor kitchen and a propane fire pit perfect for those chilly evenings. The home has two master bedrooms, both with sitting areas, and a third bedroom with an office. The top floor is the living room, chefs kitchen (award winning), and a octagon shaped dining room. One level up is a roof deck with views of the bay and conservation land. There is a dumbwaiter to all floors, security system, two car garage,sound system and all the amenities one expects from a home of this quality. Ready for your enjoyment. 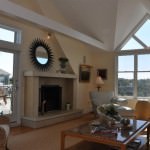 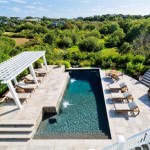 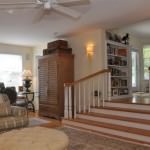 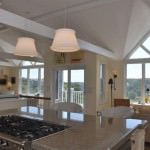 Jazmine Donaldson Curbed.com
It’s time once again for Curbed Comparisons, where we break down what you can get at the same price point, style or size in five different Cape and Islands neighborhoods. This week, listings for $499,000.

Here now, eight Cape Cod properties asking $499,000 – year-round, condos, Capes, close to the beach, in need of TLC, in the village, with an iconic small business on Provincetown Harbor, with fireplaces galore, recently PriceChopped, move-in ready, and ready to rent – with a little something for everyone.

PROVINCETOWN
Brace, the iconic Northern Lights Hammock shop is for sale. The 320-sq.-ft. waterfront condo is available with the swingin’ seasonal business for $499,000 or solo for $$449,000.
361 COMMERCIAL STREET, PROVINCETOWN, MA 02657
WEBSITE 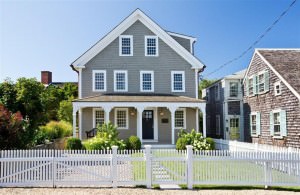 MLS COPY: Welcome to the historic birthplace of Admiral MacMillan, Arctic Explorer. This 1850 original antique has been completely rebuilt in conjunction with Provincetown historic codes. Details seen from the front and public way have been painstakingly repaired or replaced. The home is now totally rebuilt and renovated to the highest standards using top grade materials and incorporating many modern amenities. Included in the 3000sf contemporary design is a first floor open living plan, a finished basement, and three bedrooms with en suite baths upstairs. See attached floor plans and expanded detail for more. This will truly make the next owner a very special and unique historical homestead! 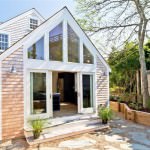 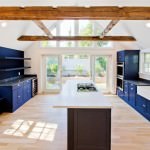 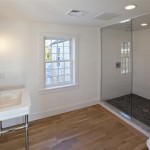 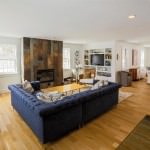 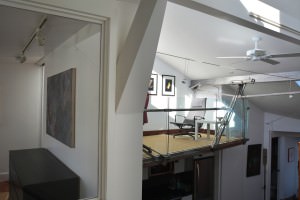 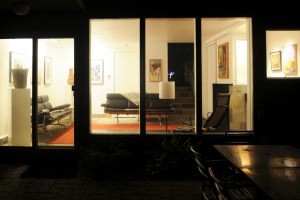 Extraordinary architect designed loft with cottage charm. This large one bedroom plus den condo has a unique design. There is a beautifully designed stainless and stone kitchen with a movable center island and a large separate dining area all enjoying soaring double height ceilings. Quartzite floors create a warm natural feel. There is a convertible guest room/den directly off the dining area and a full guest bath. Step down a few steps into the living room that has a full wall of windows that look out to a lush private garden and patio, a gas fireplace and a built in bar. The second level has a master bedroom and custom master bath. A technically striking loft space steps is steps up from the master bedroom that overlooks the main level. The bedroom has cherry hardwood floors and the loft has stained ash hardwood. There is an electrically operated wall of dormer windows on this level that lets the beautiful cape light and breezes in. A/C, parking, extra storage and much more. 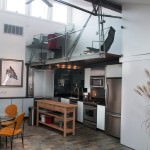 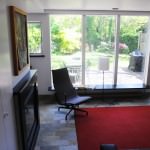 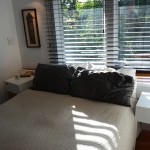 View all available  properties for sale at Beachfront-Realty.com.

Provincetown shares many of these same characteristics! Just saying.

Boston may be a good place to retire.

Forget retiring to Florida. Boston may be the place to settle down.

According to AARP’s “Livability Index,” Boston is the second most-livable large city in the United States, falling just behind San Francisco.

Though AARP makes it clear that the index can relate to people of all ages, there are specific applications for the elderly:

“Retired residents on fixed incomes need affordable places to live; those who don’t drive need other transportation options; and those with mobility challenges need accessible transportation and housing. No one wants to be forced to leave their community because of changing income or physical agility.”

And, on AARP’s list of the 10 most livable neighborhoods, Boston’s Downtown Crossing made the cut.

AARP elaborated upon Downtown Crossing’s score calling it, “A shopping district in transition to more mixed use with high-rise residences. Adjacent to Boston Common (and all of its recreational amenities), the theater district and the financial district. Stations for three main rail lines are nearby. Some streets are for pedestrians only.”

With AARP’s “livability index” you can type in an address, state, city, or zip code to get a score that is based on an assessment of seven categories: housing, neighborhood, transportation, environment, health, engagement, and opportunity.

Boston received a score of 65 out of 100 for livability, broken down into the seven categories below. Each score is out of 100.

Housing (80): 86.3 percent of the units in Boston are multi-family and there are 681 subsidized housing units per 10,000 people, which is way above the U.S. median of 124. AARP says that they measure units that are multi-family as elders whose spouses have passed away, single-parent families, childless couples, or people who choose to share housing with roommates may prefer this living situation. But Boston’s housing costs, ($1,455 average per month), which includes taxes, rent, mortgage fees, and utilities, falls significantly above the U.S. average ($999 per month).

Transportation (84): In regards to frequency of local transit service, walking trips, household transportation costs, and crash rates, Boston does better than the United States on average. Maybe not so shockingly, Boston does worse than average in terms of traffic congestion.

Engagement (61): This category looked at metrics based on civic and social engagement in the community. Boston ranked very high in Internet access and also fell above the national average of the number of cultural, artistic, and entertainment institutions available. Opportunity for civic involvement and the social involvement index were both about average, while voting rates in the Hub are lower than the national average.

Opportunity (25): This was Boston’s worst ranking of the seven, scoring below average in all of the metrics – income inequality, jobs per worker, high school graduation rate and age diversity.

Another great curbed.com comparison from Jazmine.

It’s time once again for Curbed Comparisons, where we break down what you can get at the same price point, style or size in five different Cape and Islands neighborhoods. This week, listings for $589,000.

Here now, eight Cape Cod properties asking $589,000 – year-round, condos, Capes, close to the beach, in need of TLC, in the village, Circa 1775, overlooking Provincetown Harbor, with fireplaces galore, recently PriceChopped, move-in ready, and ready to rent – with a little something for everyone.

EAST FALMOUTH
This geographically inclined listing for a “remodeled California ranch” with “a new European style kitchen” and a family room featuring “a Tennessee marble floor” is yours for $589,900.
87 DAVISVILLE ROAD, EAST FALMOUTH, MA 02536
WEBSITE

HYANNIS
The original Nathaniel Snow House dates to 1775 and is named after the second owner, Winslow Gray. Asking price for the 7BR compound is $589,000.
9 GRAY LANE, HYANNIS, MA 02601
WEBSITE

PROVINCETOWN
On the market for the first time in almost 20 years is this 1BR, 1BA with an exclusive use deck. “This downtown penthouse water view condo is quintessential Provincetown!” Asking price is $589,000.
359 COMMERCIAL STREET, PROVINCETOWN, MA 02657
WEBSITE
See all available properties at Beachfront-Realty.com

The listing of the week is 1 Atlantic Avenue,  a three bedroom two bath single family home with 1,673 square feet. It is located on the corner of Atlantic Avenue and Commercial Street in the near West End. It is being offered at $1,485,000. 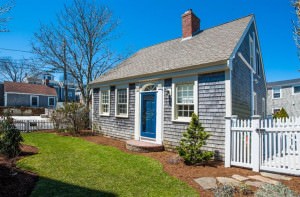 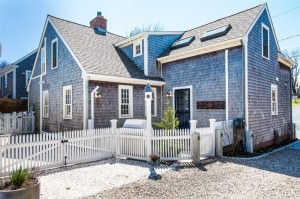 MLS COPY: Every inch of this classic Cape has been meticulously restored to 21st century style and convenience while still retaining its 1700s heritage. The chef’s kitchen features 2 inch thick Carrera marble atop custom cabinetry, a professional Thermador dual-fuel range and Sub-Zero glass-front refrigerator. This 3 bedroom home is currently configured with two master bedroom suites, one on the main level and one on the second level, each with a fireplace and adjoining private dressing rooms and world-class baths. Exquisite living room downstairs with fireplace, and a large vaulted media room on the second level (previously used as a third bedroom). Magnificent perennial gardens with complete irrigation fed by private well. Two large parking spaces. Properties of this quality and exceptional location are rarely available. 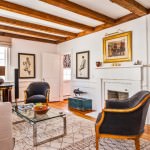 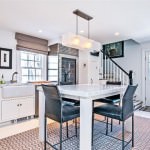 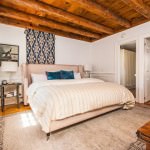 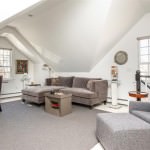 This is a gorgeous restoration of a 1700’s house.