I was doing a report for one of our sellers in the $400K to $600K range, the core of the condo market here in Provincetown and came up with an interesting fact.

Yesterdays Boston Globe article follows for those who didn’t see it. It is all the buzz!… and for good reason. 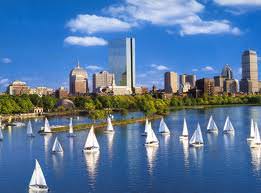 Condominium values in Boston’s core reached a record high during the second quarter of this year as eager buyers drove up sales, according to data­ scheduled to be released Tuesday.
The median price in a dozen downtown neighborhoods — they include Beacon Hill, the Fenway, the North End, and South Boston — climbed to $515,000 during the three months that ended June 30, according to LINK, meaning half sold for more than that price and half for less. That topped the previous peak of $498,500 in 2008, just prior to the nation’s financial crisis. LINK, a Boston company, tracks the downtown condominium market.
The increase adds to mounting evidence that the state’s housing market is on the mend, housing specialists said.

“The feeling out there is prices are not going to soften anymore,” said Barry ­Bluestone, the director of the Dukakis Center for Urban and Regional Policy at Northeastern University. “We are seeing the real signs of a recovery in the housing market.”

Even during the worst years of the real estate industry’s decline, condominium prices in some of Boston’s more desirable areas fell only modestly, putting the local market in a better position to rebound. Prices and sales were propped up by higher-income homeowners who were hurt less during the recession, as well as by the increasing popularity of urban living coupled with limited inventory, housing specialists said.

“The city attracts young and old by providing fun and beauty, art and restaurants, all without needing a car,” said a Harvard University economist, Edward­ Glaeser, author of the book “Triumph of the City.”

Trisha Collins McCarthy, president of the Massachusetts Association of Realtors, said many condominium buyers like the idea of trading long, congested commutes for city conveniences. “We have more of a population that has said, ‘I want to be near the train,’ ’’ she said.

After dropping for a couple of years, downtown condo prices started to climb in 2010. This year, that growth has been bolstered by continued low interest rates and improving consumer confidence, according to housing specialists.

Condominium sales volume was up sharply during the second quarter of this year, to 1,051, or nearly 36 percent more than during the same three months of last year.

The median sale price of condominiums in luxury buildings — those that offer amenities such as concierge and valet services — also climbed.

The $779,000 median closing price for the luxury condos was 7.8 percent higher than during the second quarter of 2011, LINK said, compared with 7.5 percent higher for the all of the Boston neighborhoods measured by the company.

The number of luxury condo sales during the past three months increased by 22.2 percent to 198, the company said.

Statewide, single-family home values remained essentially flat in June, at $331,000, compared with June 2011, while the number of sales increased by 18 percent to 5,099, according to William Raveis Real Estate, Mortgage & Insurance. It is based in Shelton, Conn., but also does business in Massachusetts.

Even though more people are signaling they are ready to buy a condominium in Boston, real estate agents say they struggle to find enough units to show. Only 531 properties were available in the downtown area on the last day of June, about half the number up for sale on that day in 2011, LINK reported.

Eddy Foley, 45, said he has spent six months looking for a South End condominium priced in the $500,000 range. He found one he wanted, but lost out when someone else bid $34,000 over the asking price.

“It’s torture out there,” Foley said. “There’s really nothing available.”

“We have more demand than we have property to sell,’’ Laurella said. “We can barely list anything without it going under [a purchase agreement] within a couple of weeks.”

John Ranco, a senior sales associate with Hammond Residential Real Estate in the South End, said times have changed so drastically that real estate agents are now searching to locate interested sellers rather than wary buyers.

“The supply side is really hurting,” Ranco said. “There is a tremendous amount of pent-up demand.”

The Big Number is 16%. That’s the increase in condo sales in Boston as of June 30. Combined, all Boston neighborhoods saw a 16% increase in the number of condo sales year to date, a 2% increase in the average price of a condominium sold, and a 5% increase in the median sales price. Put together all this good news is more evidence that while not necessarily out of the woods, this real estate market is healthier than most. The one downside to this exceptional sales activity is that inventory levels of available condo’s for sale have fallen 38% to 1,177 properties for sale versus 1,903 at th is time last year.

Boston’s most expensive neighborhood the Back Bay,  saw a 30% increase in sales while the average price  of a condo sold dropped by 11% to $1.162M. The inventory level of properties for sale dropped 31% to 168 condos for sale vs 242 last year.

The South End saw a 24% increase in the number of condo sales to 264 properties and  the average price of a condo sold increased 1% to $684K. The inventory of condos for sale decreased 45% from 208 to 114. Unless this condition corrects itself this will be a factor in market performance going forward.

South Boston, the darling of the my last market report moderated somewhat with a 4% increase in the average sales price to $408K and a 12% increase in sales to 235 properties sold through the second quarter. South Boston has the largest drop in inventory of all downtown n’hoods down 56% from 225 properties for sale last year to 99 available for sale today.

Every downtown neighborhood has it’s own story and most are positive excepting the inventory numbers. Total Boston numbers highlight the good news. Sales volume is up 19% to $1.080B… One Billion, 80 million dollars! Average days on market are down 12% and the inventory of properties for sale is down 38%.  These numbers highlight incredible short term performance but portend serious issues going forward. 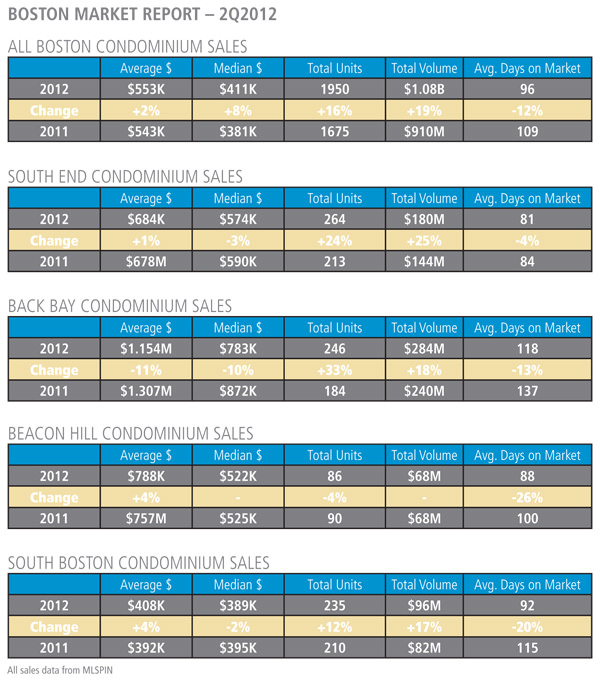 Sales through the 2Q in Provincetown continue to be strong! Growing economic optimism and continued low interest rate have kept buyers and sellers in the market, and almost more importantly, there is a great assortment of properties for sale.

Year-to-date condominium sales through the second quarter surged 28% from 54 sales last year to 69 sales this year. The average sales price of condos sold increased 11% to an average of $400K vs. $361K last year.

Single Family sales did more than surge – they exploded! We went from 14 sales last year to 27 sales through the second quarter. Even with this relatively small sampling, these represent very positive increases. The average sales price of single-family properties sold was $731K. The total sales volume of single-family homes sold was close to $20M – up 67% from last year’s volume of $11.8M.

These figures are evidence that the market has improved markedly year-over-year. More evidence of the market improvement can be seen in both the condo and single-family segments where the average days on market has decreased by 33% and 9% respectively. While we don’t look at days on market with quite the same importance as we do in Boston, DOM’s are a good indication that properties are selling faster and that the inventory of properties for sale is becoming leaner.

Speaking of inventory, as of July 14 there are 157 condominiums for sale in Provincetown, with an average price of $466K and an average price per square foot of $583. And the average days these remain on market is 246.

We are in the midst of an incredible summer season here in town and this will surely add to the positive real estate news. The number of buyers and of sellers looking to market their properties for sale is up, indicating continued strength and excitement for real estate in our little fishing village.