What a week last week was in the Boston South End office of Coldwell Banker Residential Brokerage. Agents were uncharacteristically busy for the week before Christmas. Showing levels increased on many properties that have languished on the market for months. Six under agreements came in in the last 3 days. It’s as if folks realized the year is about to end, and oooops! Realized they forgot to buy a condo!

A number of agents were rushing past my office frantically scheduling multiple last-minute showings on their properties. “You want to see the property at 6PM Friday evening, the night before Christmas Eve? Of course we can schedule that!” I heard negotiations between buyers who had walked away from negotiations a week ago and sellers who were willing to revive those negotiations, finally come to an agreement. We have had several closings that had been postponed finally close and others will close this coming week.

What does this year end flurry of activity mean? It might be simply that the weather outside was 50 and sunny. It might be some year-end pent up demand or it could be just the natural urgency in negotiations that typically occur at the end of every year. Whatever it is, it is welcome. Year-end sales figures will ultimately give us the answers.

As the year winds down conversations around the office and in our last business meeting invariably end up being about what business will look like in 2012? Interestingly, with all the challenges we have faced in 2011 – from financing problems, to a shortage of inventory, to tough negotiations – agents are very positive and upbeat going into the New Year. I think that for agents who have learned to work successfully through the challenges in this “new real estate normal,” they have come out the other side with a renewed confidence in their ability to succeed and with a more positive attitude for the year ahead. This is surely a good sign for all of us for 2012.

Have a wonderful holiday week.

Michael Ferzoco is the principle of Eleven Interiors, the interior design firm he founded in 2005. Michael will be a regular contributor to my blog adding a fabulous design component to the conversation. His first post distinguishes the differences between scale and proportion in design… fascinating. Enjoy. You can reach Michael at [email protected].

Let’ take a minute to clarify a couple of terms used in daily communication in the design world – scale and proportion. These terms are frequently used interchangeably because their meanings can be confusing, but they are quite different.

In the simplest and fewest words, scale refers to overall size. Proportion refers to relative size. But that doesn’t really help very much, does it? How about this instead?

The scale of an object or a space is relative to the idea of that object or space, literally the human perception of what is the norm or the ideal for that object or space. For example, the scale of a sofa is either small or large when compared to other sofas. So when you walk into a friend’s 1,000 s.f. apartment and he has one of those overstuffed, lounging sectional sofas, you’re correct in thinking to yourself  “Wow the scale of that sofa is HUGE!” And of course you’d be thinking of that sofa relative to other sofas that you’re familiar with…and you’d graciously keep your thoughts to yourself!

On the other hand, proportion refers to the relative size and scale of the various elements in a space. The issue here is the relationship between objects, or parts, to a whole. So your thoughts about the aforementioned sectional sofa would now be “wow the scale of that sofa is HUGE and the proportion for this room (basically the amount of space it requires relative to other furnishings in the room) is all wrong”.

Our most universal standard of measurement is the human body. Think about it. We judge the appropriateness of size of objects by that measure. For example, a chair in the form of a hand is quite an attention getter because of the distortion of expected proportion of a human hand, and therefore it becomes the center of attention in the space.

Architectural spaces that are intended to impress us are usually scaled to a size that dwarfs the human viewer. Public spaces, such as churches or government buildings, corporate spaces and museums are often very large in scale relative to other buildings. These structures impress us with their grandeur and size, creating a sense of power and invincibility. In contrast, the proportions of a private home are usually more in scale with human measure, and as a result the home appears friendlier, more comfortable, less intimidating.

Not so confusing after all.

With over 25 years of experience, Bill Farmer has made the move to Provincetown where he will continue helping buyers and sellers with all their outer Cape Cod and Boston real estate needs.

Bob O’Malley, broker/owner of Beachfront Realty says, “I’m so excited to have Bill on board. I really appreciate his years of professionalism, honesty and integrity. Please stop by, say hello and help us welcome Bill to Beachfront Realty.”

“I’m thrilled to be selling real estate in Provincetown after assisting buyers and sellers in Boston and Minneapolis for so many years,” adds Bill Farmer. Bill can be reached at 617.823.2444 or by email at [email protected].

The over $1,000,000 high-end market gets all the attention. We all love talking about these fantastic properties! And interestingly enough, this market for all its glamour, has remained very stable and solid over the last two years in downtown Boston and specifically in the South End.

The average days on market (DOM) for properties above $1M was 140 days this year vs. 165 days last year. DOM is an excellent marker of market demand. The fact that DOM went down 15% this year means these properties are selling a bit faster than last year. This is a great sign of market strength.

The strong and consistent performance in the luxury market in the South End is excellent news for the market in general. These sales get all the glory, but they support the entire market as it instills confidence citywide. For those looking to buy or sell in any price point in the South End these encouraging figures should add an additional level of comfort for both buyers and sellers.

What is the prognosis for the above $1M market for 2012? I will post an update in the New Year with finalized year-end figures along with my thoughts on what I think the market might look like next year. I will also post the opinions of others talking about where they think the luxury market will take us in 2012. Stay tuned.

There’s an awful lot of construction activity in Provincetown these days. East End, West End, downtown. Seems like you even have to watch for construction vehicle traffic everywhere you are – and it’s December! 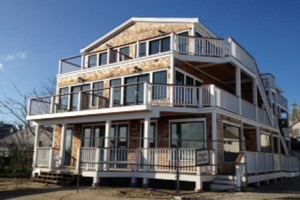 Harborfront Landing at 333R Commercial Street is a newly completed luxury beachfront condominium development in the center of town. Currently, the new project consists of seven 1BR and 2BR homes from 465 to 798 square feet and listed for $476K to $998K – parking included. 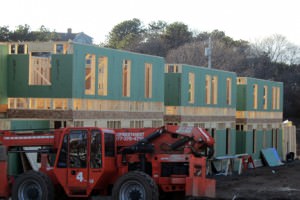 Province Landing is a $14.5M, 50-unit rental community offering a high-quality, green community for year-round residents with moderate incomes. Located on an undeveloped parcel along Shankpainter Road, this project is a great new addition to the western most entrance to Provincetown.

Construction at Herring Cove Village Phase 2 is well under way with six new units targeted for summer 2012 completion. Located in the far West End very close to the moors, this great mix of 2BR and 3BR+ condominiums are priced from $749K to $1.399M.

A new 9-lot subdivision on the famed Murchison House property at 2 Commercial Street in the far West End is quickly moving ahead. Called Pilgrim’s Landing, the projects sits directly across from the Provincetown Inn with great water views. Phase 1 is already under construction and includes the renovation of the existing gatehouse (pictured), the grounds and the Murchison House designed by Walter Gropius.

As of 10.31.2011, average condo prices are up 6% year-over-year in the South End, according to MLSPIN. This is stunning figure given the real estate headlines day in and day out in local and national media! This is a very sticky figure that has remained steady for most of the year.

What is behind this figure? The average price of a condo sold year-to-date in the South End is $667K which represents a 6% increase over the average $630K sale price in 2010. Other figures include: a median price of $545K, which represents a 4% increase over last year’s median price of $545K; total number of sales year-to-date of 412, which is 5% lower than in 2010 and the total dollar volume of condo sales is $274M – just about flat with last year.

And most other downtown Boston neighborhoods are maintaining their value as well. Lucky for all of us, Boston remains resilient in this stormy real estate environment. Relative to the rest of the country, Boston still rocks!

In future posts, I will examine these statistics in depth and discuss what they mean now and for the future of our real estate markets.

This happened a few weeks ago, but still worth talking about. Picture 180 real estate agents from downtown, Wellesley, Arlington, Newton, Weston Cambridge and Brookline. In town cars, Mercedes buses and on foot. Give them a chance to tour eight phenomenal properties in Beacon Hill, Back Bay and the South End – from $1.8M to $6.3M – and you have a wonderfully dynamic mix of properties and personalities. Ken Tutunjian was the creative director of the tour and Jeffrey Heighton was the Beacon Hill office host.

And I was transportation director, go figure. You try coordinating six vehicles picking up and dropping off 180 agents over three hours at eight different addresses who were all hungry and needed restrooms by 11AM. Amazingly, the tour was a smashing success.

The goal was to group some of our best luxury properties so that a broad assortment of agents from downtown and the near metro west burbs could see a remarkable representation of downtown luxury inventory. Transport them in luxury, arm them with pertinent information, give them guided tours of each home and of course, provide a sumptuous luncheon at Smith & Wollensky’s sponsored by Boston.

My personal favorite was 129 Charles Street. It was the only single family residence on Charles Street. What a surprise! A totally reworked interior, very modern, very open and unbelievably sophisticated – all inside a very traditional Charles Street brick exterior. $4.75M