3 Bradford Street Studios One and Two 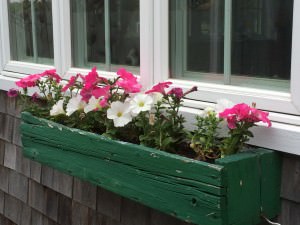 Charming beach studios in the near West End provide an authentic Provincetown experience along with the best location in the West End. Originally an out building of Clarence Kacergis’s welding studio* the building has been transformed into a charming cottage condo community. 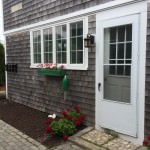 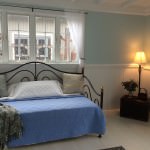 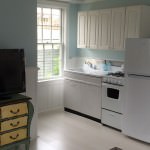 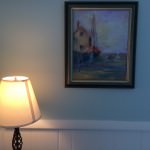 Studio #1 and Studio #2 have been recently refreshed with all new interior and exterior trim paint,  bead board walls, new floors, great ceiling height with beautiful cape light from multiple light exposures.  An efficiently designed kitchen blends with the character of the living space.  Gas hot water and cooking. Studio One has a large and  private exclusive use garden patio, Studio Two has exclusive use garden/patio. Each has one parking space. 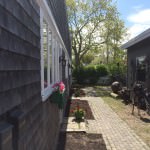 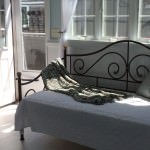 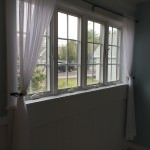 3 Bradford is located within a 5 minute walk  to Commercial Street, ½ block to Victors restaurant, 2 blocks to the bay beach and a 5 minute walk to the moors and Herring Cove beach. Charm, convenience, history and community, and an unrivaled West End location are yours at 3 Bradford Street.

The surprise is that this gorgeous house on the pond is in the near West End of Provincetown and only 5 minutes from Commercial Street close to all. This 14 year old contemporary Cape has a luxurious chefs kitchen with double ovens, 2 large bedroom suites, a sauna, hot tub and two out door dining areas, a separate den…and a meditation room! 46 Shank Painter Road is being marketed for $998,000.

In many markets the “high-end” or above $1M market is the most visible market. The same holds true in Provincetown. The big waterfront homes, the “trophy” properties, the East End and West End compounds all draw interest and gossip. But interestingly enough many of these homes are wonderful family and year round properties, very accessible and in fact well priced for the amount of house and value that you get.

There are currently 37 properties (single family and condos) on the market above $1M representing 23% of the available  inventory of 157 properties. In stark contrast only 13% of 2013 sales were for properties with selling prices over $1M. This means that properties take a little longer to sell in this price segment as there is more competition for buyers eyes and dollars. We need to remember that the second home market in a ny price point is not as fast paced and dramatic as the primary home market. For many this means a more relaxed buying and selling process.

See nine of my favorites below.  Click on the address for a link to the property detail on Beachfront Realty.com.

As you can see from the choices above these available properties represent all styles – traditional large Cape, Antique, modern – there are even 3 condominiums available in this price range.

It’s time once again for Curbed Comparisons, where we break down what you can get at the same price point, style or size in various Cape and Islands neighborhoods. This week, the most unique listings we could find.

What do Julia Roberts, a Broadway producer, wildlife galore, and Sigmund Freud all have in common? They’re all mentioned in Cape and Islands’ listings, of course. Behold, a special edition of Curbed Comparisons featuring 10 of the most unique listings from Cape Cod, Martha’s Vineyard and Nantucket.

JULIA ROBERTS
Per the brokerbabble, “Julia Roberts stayed in this guest house.” The folks over at The Real Cape were unimpressed, but if you are and you’ve got $2.7 million, ocean views and a celebrity connection await.
16 MASSACHUSETTS COURT, FALMOUTH, MA 02540
WEBSITE

AIRPARK ABODE
Located in Falmouth Airpark, here’s a 4BR, 3.5BA with its very own hangar featuring “direct access to the end of the runway and… enough room for cars, a small boat, motorcycles and an airplane.” Asking price is $836,000.
49 QUIMBY LANE, EAST FALMOUTH, MA 02536
WEBSITE

PLAYBILL: NEW SEABURY
The house itself is a typical 1972 Contemporary, but “multiple living areas and decks once hosted elegant parties thrown by the previous owner a renown Broadway producer.” Perhaps that’s who left the piano behind? Regardless, the New Seabury spread is yours for $375,000.
197 FELLS POND ROAD, MASHPEE, MA 02649
WEBSITE

FREUD +/- CROQUET
When we first wrote about this dreamy Colonial back in October, the listing was claiming a Sigmund Freud connection, but no longer. Per the current brokerbabble, “it is recorded that the first game of croquet in America was played on this lawn.” Either way, some sort of bragging rights are yours for $839,000.
86 PUTNAM AVENUE, COTUIT, MA 02635
WEBSITE

CAMP RETREAT
“Calling all artists, writers, hunters and those with the desire for solitude,” your 2.5 acre camp retreat on the Great Marsh awaits. It’s “wildlife galore” for $125,000.
311 NAVIGATION ROAD, WEST BARNSTABLE, MA 02668
WEBSITE

CANDLE FACTORY
“This building is believed to have once been a candle factory” and is now a 3BD single-family on the market for $1,195,000.
1 HIGH STREET, NANTUCKET, MA 02554
WEBSITE

If the entry level and mid market are well populated with property choices for buyers, the luxury market, $750K to $1M market  has few. There are only 11 properties on the market in this range, 4 single family and 7 condos representing only 7% of available properties. In stark contrast 22 properties sold in this range in 2013 representing 22% of all sales.

To be fair, this segment overlaps into the $1M+ market which is relatively crowded, but it is still a natural price break for buyers. Almost all of the available properties are pictured below.

From an historic Commercial Street single family house in the East End to a beachfront condo to a newly renovated beauty in the West End on Bradford Street, the diversity and quality of these properties belie their low numbers.

The Mid Market In Provincetown

The mid market is generally those properties priced from $400K to $750K. There are 9 single family properties and 43 condominiums available for sale in this segment of the market representing 32% of total properties available. The average price is $552K, with an average square footage of 1,084. This is by far the most popular market segment.  Two bedrooms with two baths in the East or West End between  $400K and $800K –  The most popular request!  NIne of my favorite are shown below. (click on address to see full listing details)

Spring is finally here. Time for a spring market review.

There are some great properties on the market in Provincetown with more to come as the spring/summer market heats up. I’ll begin with a review of the affordable entry level market .

The affordable entry level market generally includes those properties priced from $100K to $400K and is loaded with surprising options and is a great way to enter the real estate market in town – either for your own vacation or year round use or as an investment/rental property.  Buyers are always surprised at what they can get in this segment of the market. Comfort, location, space and value!.  There are 59 properties on the market in this segment, all are condos except for 1 single family listing. These  represent 36% of available properties.  The average asking price is $306K and the average size of available properties in this segment is 607 square feet.  9 of my favorite are pictured below.  Just click on the address and you’ll see the full listing information on Beachfront-Realty.com.

It is hard to believe that you can still buy a single family home for under $600K in Provincetown, let alone a relatively new 4 bedroom 4 bath property with a great yard and super location. 70 Race Point Road is a 4 bedroom 4 bath  2,736 square foot single family home …and it sold for $585K, $213 per square foot!   The quality and size of this house is exceptional and it even has a large guest suite with a separate entrance on the lower level. The new owners could not be happier. 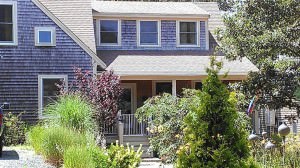 MLS Copy: You’ll love living so close to Beech Forest, the bike trails, the National Seashore and Race Point Beach and yet a quick bike ride or walk to Town Center. This very generously sized home features wood flooring, high ceilings, living room with gas fireplace, spacious deck, kitchen with breakfast bar open to the dining room overlooking the front porch and mature plantings in the front garden. There are four bedrooms, 3 1/2 baths, a master suite, laundry room. The Master bedroom suite boasts a private bath with a soaking tub and a walk-in closet. Part of the lower level is a beautifully finished , comfortable, private-entrance guest suite, leaving plenty of room for storage. Built by the present owner in 2003, it’s evident that great attention to detail was paid to make this home exceptional in style, size and finish quality. 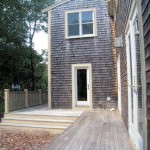 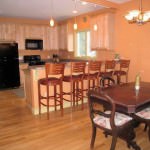 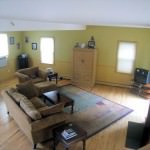 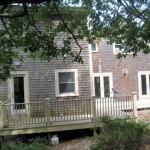 You can get an idea from these few photos how large the rooms are. The surrounding yard and decking is a huge bonus.

51 Harry Kemp Way #1. This is a 3 bedroom and 2 bath townhouse condominium in the Harry Kemp/Outer Cape Health neighborhood. It has a terrific homey feel and good flow, with a wide open bright and airy first floor plan which is great for entertaining. And look at the farmers porch and the huge front yard. Two bedrooms are on the second floor and a third bedroom, den is on the entire third floor. This property is being marketed for $625K. 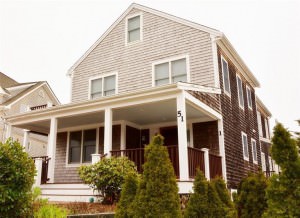 MLS Copy: Gardener’s delight. Three spacious floors of living lend this townhouse condominium the feel of a single family home. From the ample farmer’s porch you enter an open-plan living room, kitchen and dining area with hardwood floors throughout and a gas log fireplace. A full bath, newly upgraded, completes this floor. The second floor has two bedrooms and a second full, newly tiled bath. The third floor bedroom can also serve as den or home office. Beautifully maintained, the home also has superlative outdoor space: three decks,and a huge beautifully landscaped yard. Amenities include a basement, a garage, a laundry and central air conditioning, and parking for 3 cars. All 5-10 minutes’ walk from shopping, restaurants, galleries and the harbor. Weekly rentals and pets allowed. 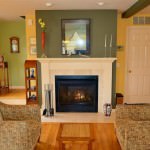 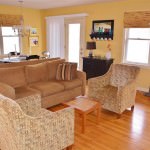 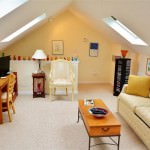 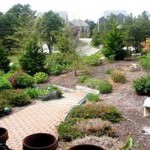 Always good to get the big picture statewide – our local markets are mirroring the statewide trends.

by | Apr 23, 2014
Prices up as closed sales down again in March compared to last year

WALTHAM, Mass. – April 23, 2014 – The Massachusetts Association of REALTORS® (MAR) reported today that while a general shortage of homes for sale pushed sales down and prices up in March, the spring market is starting to come to life. For the second straight month homeowners have added more homes to the market than the same time last year. Condominium sales and prices were both up in March.

“While the market still needs more homes for sale – including both existing homes and new construction- the increase in new listings in March is a good sign,” said 2014 MAR President Peter Ruffini, regional vice president at Jack Conway & Co., in Norwell. “With home values on an upward trend, it gives homeowners the opportunity and incentive to take advantage of the current buyer demand and list their homes for sale.”