This is an good article from Boston Magazine about the Cape Cod real housing shortage. We have inventory and affordability challenges in most markets on the Cape and surely in Provincetown as my posts have illustrated. We are fortunate though in Provincetown to have proactive, forward thinking folks in town government and on town boards who are spending huge amounts of time and energy on trying to find solutions to the challenges we face.

And it’s only going to get worse.

Wealthy vacationers are sucking the life out of Cape Cod, and it looks like they won’t be stopping anytime soon.

Banker & Tradesman reports more and more seasonal visitors are buying second homes on the Cape, which does not bode well for the region’s year-round residents. A swell in the demand for vacation homes is pushing out the regular folks—like restaurant workers and shop owners—who keep the Cape’s tourism industry churning.

This, and other unfortunate data, was published in a new Barnstable County housing market analysis prepared for the Cape Cod Commission. The report’s main takeaway? There’s an alarming housing shortage on the Cape. Massachusetts’ summer playground is suffering from an “affordability gap” thanks to rising home prices and low wage growth in the Cape’s tourism businesses.

As more homes on Cape Cod are bought up by vacationers, there’s decreased inventory for year-round residents—resulting in higher home prices. Usually, that shrinking inventory problem could be solved by building more houses, but Cape Cod’s low-paid workers can’t afford to build. Banker & Tradesman notes “what little homebuilding is happening is mostly second homes, with the exception of a few, modestly-sized affordable rental projects in the works.” And because there aren’t enough new homes being built, those looking to downsize have nowhere to go, which ties up even more of the inventory.

It doesn’t help that half of all second homes in Massachusetts are on the Cape. Over the next eight years, demand for vacation homes is expected to grow six percent, or twice as fast as year-round units.

“The Cape is experiencing a long-term surge in seasonal unit demand that it has never experienced before,” reads the report. “While second homes have been part of Cape Cod’s landscape and economy for decades, the unprecedented housing crisis of 2009 created something that Cape Cod’s housing market never experienced.”

The recovery period after the recession caused demand for seasonal homes to spike, and many year-round units were converted to vacation homes. According to the report, this surge will continue to have a long-lasting effect on Cape Cod’s housing market for the next decade. There are other takeaways from the analysis, too, like how the burden is mainly felt by those earning 80 percent or less of Barnstable County’s median income: $63,251. But the pinch will soon be felt even further up the income scale. By 2025, the greatest increase in burdened households will be in those earning 100 to 120 percent of the projected median income.

So, what is the state’s hook-shaped sand bar to do?

Simply increasing the supply of houses won’t magically cure the Cape since “there will be a strong economic incentive for the new construction to be converted to seasonal units,” reads the report. The analysis lays out a few solutions, including increasing the diversity of senior housing, increasing multi-family housing, and creating better public infrastructure.

“This isn’t a problem we can build our way out of under the regulations of the past,” Cape Cod Commission executive Paul Niedzwiecki said in a statement. “If we create the right environment and appropriate opportunities for higher density, we could see the market respond and close these gaps.”

48 Harry Kemp Way #3 is a two bedroom, three bath condo with 1,114 square feet.  It was marketed at $699K and sold recently for $685K,  This condo is an excellent example  of the mid market here in Provincetown. 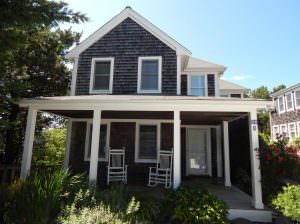 Remarks: You’ll enjoy spacious townhouse living in this centrally located condominium. This immaculate home boasts an open floor plan living/dining/kitchen area with newly refinished hardwood floors, a wood-burning fireplace, and a half bath, all on the 1st level. On the 2nd floor, the oversized master bedroom has vaulted ceilings, exposed beams, 2 large closets and a bathroom with a jacuzzi tub and a separate shower. Also upstairs, a 2nd bedroom and a 2nd full bathroom. All baths were recently renovated. Use the unfinished basement for storage or create even more living space by finishing it. The exclusive use covered porch surrounded by beach grasses and flowers offers a lovely spot for relaxing or cooking out. CAC, 2 parking, pets for owners and weekly rentals permitted. Lovingly maintained.

59 Commercial Street is comprised of two houses, one on Commercial Street and one directly on the water. There are three total bedrooms and five baths and a total of 2,364 square feet in the two buildings. This is an exceptional waterfront property in the heart of the West End. It is being marketed fort $3.490M. 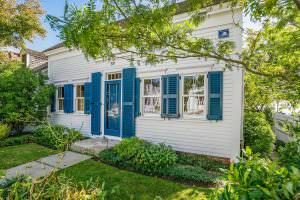 MLS Remarks: You’ll find this exquisite compound consisting of 2 year round homes in the West End, directly on the bayfront. The 1468 s.f. main house was floated over from Long Point and has been totally renovated with details respectful of the period but with all the modern amenities. The 2BD/2.5BA house has wood flooring throughout, a gourmet kitchen, and 2 wood-burning fireplaces. The 984 s.f., 1BD/1.5BA cottage sits directly on the water with lovely views of Provincetown Harbor and Long Point. Separate utilities, split A/C, wood floors, full kitchen, 2 decks. The beautifully landscaped yard has irrigation, parking for 2-3 cars, and bluestone patios. Hooked up to the municipal sewer system. Listing courtesy of Atlantic Bay Sothebys Intl. Real Estate.

27 Watsons Court is a beautifully renovated three bedroom three bath  single family home with 1,724 square feet. It was listed for $1.395M and sold recently for $1.525M – well over asking.

Watson’s Court has seen a lot of activity over the past several months. It is a sweet little lane between Prince Street and Court Street. #23 was a wonderful old house that recently sold for $947K.  25 Watsons is a gorgeous single family renovation with a cottage. It sold in a private sale for well above $1M. 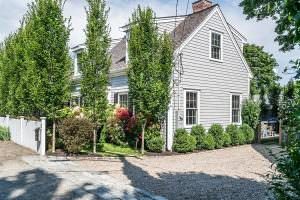 MLS REMARKS: You’ll be enchanted by this newly built contemporary Cape style home located on a quaint west end lane. Great floor plan, with living spaces built for entertaining, and wonderful attention to detail, with high end finishes throughout. The first floor has a spacious and bright living room, warmed by a propane fireplace, and flows into the dining area and the large chef’s kitchen, which has a large center island with granite counters. The kitchen is equipped with a wine refrigerator, gas cook top, and a convenient pot filling faucet over the range. Also on the first floor, one bedroom and one full bathroom with a tub. The first floor bedroom also opens onto the patio.

Upstairs, you’ll fine two more bedrooms, one with an en-suite bath and a balcony overlooking the yard, and the other with access to the large hall bath, which also houses the washer and dryer. Out back, you’ll delight in the beautifully planted fenced yard, which offers lots of privacy.

1 Pilgrims Landing is a three bedroom, three bath home with 3,554 square feet at the base of The Murchinson sub division in the far West End. It is being marketed at $2.145M. It is located at the Commercial Street, Province Lands Road circle across from the breakwater. 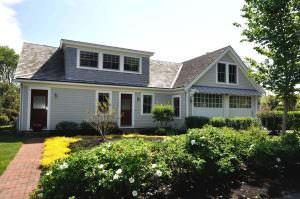 Here is my first edition of Studs To Shingles for the fall. There is tons of activity which I’ll try to keep you on top of over the next several weeks.

65 Franklin Street, the old Ronnie White property (small pic below) has finally begun development into what will be several condos – there are reports of 8-12 units.  The picture on the right  is the first building going up which we hear will consist of two one bedroom plus units. There will be a second story. The minute we get more details we will pass it on.  It should be an exciting development. 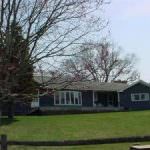 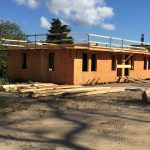 There is Lots of activity on Point Street.

There is a new house going up at 29 Point Street. (The picture on the right) Is it  spec house or a  private home being built. Ill find out!

In the picture on the left you can see a peek of 33 Point Street which is in the framing stage. It is on a 13,939 square foot lot that sold for $495K in 2015. Sure to be a great house. I am keeping and eye on it too to see if it is a spec house for sale or  a private home being built. 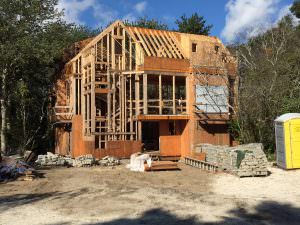 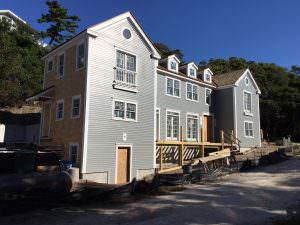 31 Point Street (below) is a brand new single family home with three bedrooms three baths and 1,400 square feet.  It is being marketed for $1.329M. 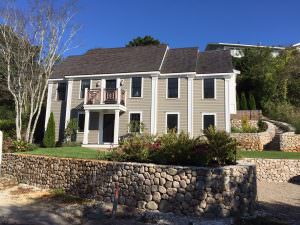 MLS REMARKS:  Brand New Construction, Just completed and new to the market! Gorgeous custom 3 bedroom home on exclusive Point Street in the West End. Feel the privacy and tranquility of this special neighborhood as you enjoy tree house views from the main level which offers custom wood flooring, custom cabinetry and fine finishes throughout. All bedrooms have en suite bathrooms with oversized showers and the living/dining room enjoys cathedral ceilings loads of sunlight as well as a custom wood paneled fireplace and a built in window seat. Listing courtesy of Atlantic Bay Sothebys Int’l Realty.

70 Franklin Street is one of two lots which includes 15 Race Road and is being developed into two single family homes. (15 Race Road is already under contract) This house has three bedrooms and three baths and 1,675 square feet. It is being marketed for $1.349M. The picture below is the empty lot and the larger picture is a rendering of 70 Franklin Street. 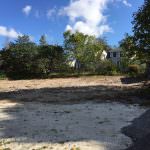 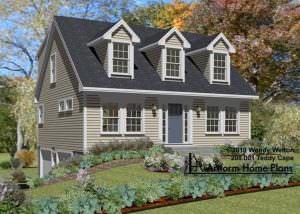