Anyone who has visited Provincetown over the years has certainly seen the fabulous Provincetown Welding Works, the late Clarence Kacergis’s studio/workshop on Bradford Street right  before Victors Restaurant in the West End. Clarence was a huge personality and an important cultural icon throughout his life. He was much loved.

Below is an excerpt about 3 Bradford Street from Building Provincetown, a wonderfully written and informative blog, itself an important cultural resource written by David Dunlap. 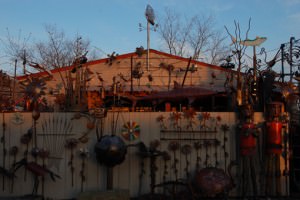 Provincetown Welding Works
The amazingly animate yard of the Kacergis family’s Provincetown Welding Works looks like a Tim Burton movie come to three-dimensional life. The works were established in 1946 by Clarence Kacergis (born 1916). “At first, he imagined a simple welding shop until several Provincetown artists and sculptors looked to stretch themselves and embrace metal as a heightened form of expression,” Gerry Desautels wrote. (“Forging a Dynasty in Steel,” The Banner, Oct. 16, 2003.) Among them was Chaim Gross. In the present day, Desautels continued: “Maritime objects, fauna, flora and Cape characters — strumming musicians, rowing sailors and sawing woodsmen — are depicted in quirky Kacergis style throughout the chock-a-block shop.”

“The works are wonders of modern recycling and years of collecting parts and pieces from unspecified junkyards on and off-Cape. They keep their sources guarded like classified military information. Ball bearings, dulled blades, washers, chains, quahog rakes, frying pans, and retired oxygen tanks and lawn rakes are just some of the remnants incorporated into airy mobiles and butterflies, charming folk figurines, bright bird and flower sculptures, and precious metal mammals.” Clarence’s son, Michael Kacergis, who now runs the business, acquired the property at 3 Bradford Street in 1999. His son, Aaron, “tinkers with welding on weekends,” The Banner said. Lonely Planet noted that “each generation has its own style, themes and motifs.” Even after he stepped down, paterfamilias could keep an eye on the shop from his home at 4 Bradford Street.