By Jonah Flicker, for CNN 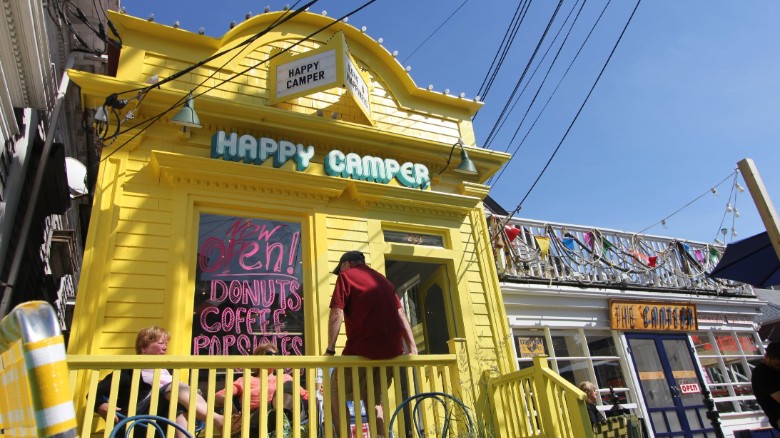 Cape Cod, Massachusetts (CNN)Part of the appeal of the Outer Cape has always been the rustic charm of the fried seafood restaurants, taffy shops, souvenir stores and ice cream parlors dotting the main artery, Route 6.

But new food and drink choices have appeared over the past few years in Cape Cod — particularly in the towns of Wellfleet, Truro and Provincetown — adding modern and innovative flavors to the culinary landscape.
Small-batch chocolate, specialty coffee shops — even a craft spirit distiller — have taken hold in the area that has long lured vacationers with Atlantic beaches along the seashore and calmer stretches of sand on the opposite side facing Cape Cod Bay.
The character of Cape Cod has not fundamentally changed, although some longtime residents are wary of what they consider the gentrification of their community.
But visitors to the area, which includes Cape Cod National Seashore, can now enjoy a range of new options that complement the traditional seaside identity of this bucolic summer vacation destination.

Truro Vineyards of Cape Cod has been around since 1991, but its sister business, South Hollow Spirits, the first legal distillery on Cape Cod since Prohibition, didn’t get up and running until 2013. 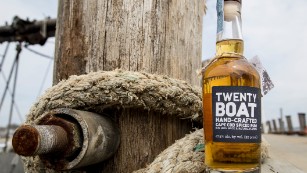 South Hollow Spirits produces two rums, Amber and Spiced.
The distillery produces two rums, Amber and Spiced, as well as the brand-new Dry Line Cape Cod Gin that was released in May. The distillery and vineyard offer tours of the grounds and tastings.
Visitors can also be found relaxing on the lawn outside the main building enjoying cocktails from the Hollow rum shack, and burgers and lobster rolls from the Crush Pad food truck, operated by the owners of the nearby BlackFish restaurant.
The vineyard and distillery normally close at 5 p.m., but every other Friday throughout the summer Crush Pad and the Hollow stay open until 7 p.m. In Massachusetts this can’t legally be called “happy hour,” but it’s a pretty convivial couple of hours nonetheless. 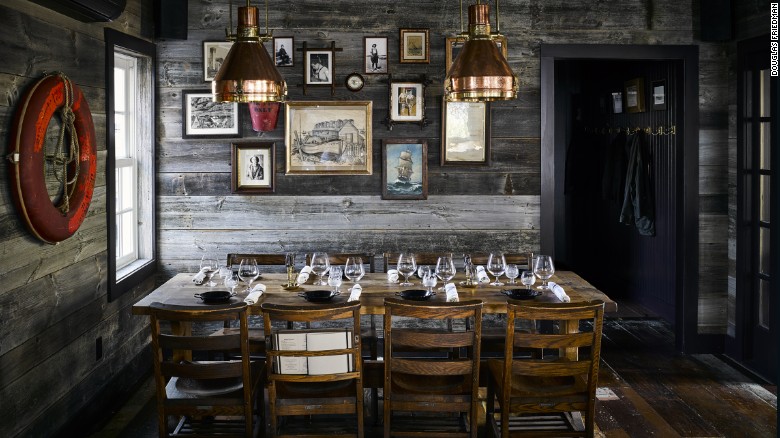 New Cape Cod tavern Strangers & Saints opened in May.
This Provincetown tavern was opened by Culinary Institute of the America graduate Fred Latasa-Nicks in May in the 1850 home of the whaler Captain John Cook.
Latasa-Nicks is a former New Yorker who made the move to Provincetown so he could devote himself to this Mediterranean-influenced tavern where weathered-wood floors, eye-catching copper and brass fixtures and a collection of artfully arranged maritime art and memorabilia evoke the spirit of Cape Cod.
He says the restaurant tries to keep the traditional flavor of the Cape, while still offering a modern menu.
Menu offerings at Strangers & Saints have included boar salami, stone hearth roasted oysters, cod, grilled skirt steak and hearth-cooked pizzas, all of which can be washed down with a rotating, seasonal menu of beer, wine and cocktails.

The Canteen and Happy Camper, Provincetown 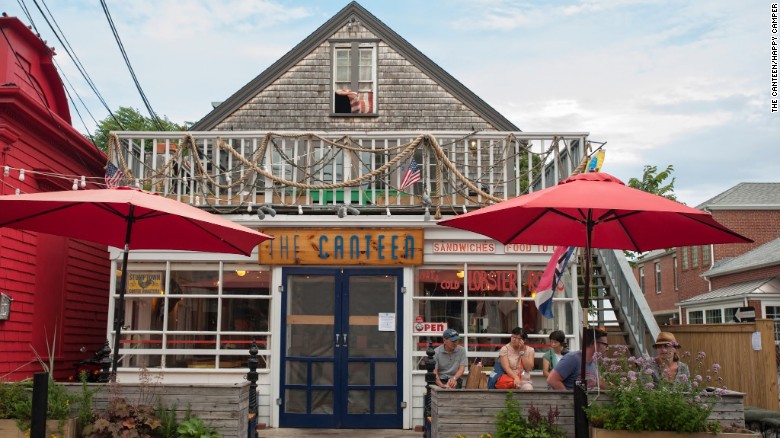 Cod banh-mi and crispy Brussels sprouts in fish sauce join more classic offerings at The Canteen.
Rob Anderson made the jump from editorial writer for the Boston Globe to restaurant owner when he opened the Canteen in 2013 and its next-door sister bakery Happy Camper in 2015, on Provincetown’s busy Commercial Street.
His mission was to bring a fast, casual, affordable restaurant to Provincetown that stays rooted in the traditions of this quirky town at the very edge of the Cape.
Classic offerings like shucked oysters, raw oysters and chowder can be found, as well as more contemporary selections like cod banh-mi, crispy Brussels sprouts in fish sauce and a PB&J like you’ve never had — grilled with peanut brittle and fresh strawberries.
The indoor tables get crowded quickly, but there’s ample seating on the pleasant backyard patio overlooking the harbor.

Chequessett Chocolate is a true small-batch, bean-to-bar chocolatier, the only one of its kind on the Outer Cape.
Josiah Mayo, a former commercial fisherman whose family has called Provincetown home for hundreds of years, and his wife Katherine Reed, a transplant from Portland, Oregon, are the founders and operators of the business.
They travel to countries like Costa Rica to source cacao beans, which they process — from roasting to tempering — in-house and turn into dark chocolate bars and confections like passion fruit-filled squares, peanut butter cups and caramel cashew turtles.
Excellent George Howell coffee, healthy smoothies and tasty pastries are served alongside the chocolate headliners in the shop. 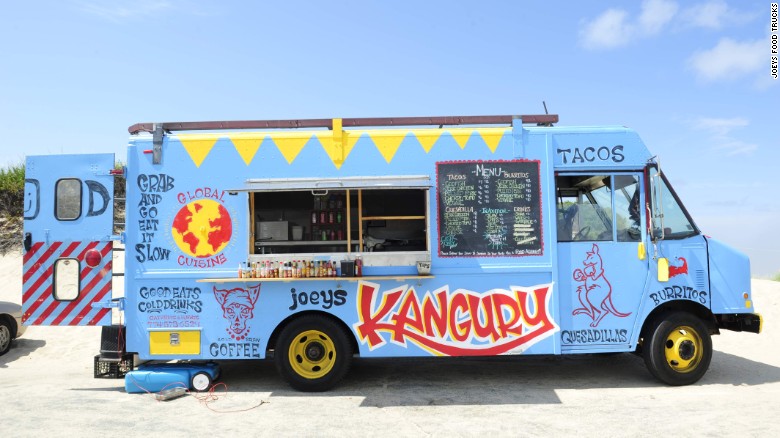 Joey Rugo operates a fleet of four food trucks in Wellfleet and Truro.
The food truck movement is now officially a part of the fabric of Outer Cape dining.
Sunbird was the first on the scene, with a stationary food truck that opened a few years back along Route 6 in Wellfleet.
Joey Rugo, a young man who started out working at restaurants in Provincetown, was inspired by Sunbird’s success. He expanded upon the concept and now operates a fleet of four trucks of his own in Wellfleet and Truro.
Joeys mobile Kanguru taco and burrito truck, offering options like jerk chicken burritos and seared cod tacos, can be found at the Truro Farmers’ Market every Monday morning and at Head of the Meadow Beach in the afternoons.
There’s another Kanguru truck in the Chequessett parking lot, and a coffee and ice cream truck along with yet another Kanguru truck at the Fleet, a small collection of food trucks located off of Route 6 in Wellfleet.

Fine dining isn’t the norm on the Outer Cape, with a culinary scene more focused on clam strip rolls and fried fish than the farm-to-table philosophy.
But Ceraldi, which opened in 2014 after operating as a pop-up in Provincetown for about a year, is focused on exactly that.
Chef Michael Ceraldi puts together a prix-fixe, seven-course meal that changes nightly, telling what he calls “the story of the Cape” using ingredients from local suppliers like Truro’s Hillside Farm, fresh catch and even foraged ingredients such as blueberries and mushrooms.
Ceraldi is proud of the restaurant’s relationship with the Outer Cape community, which not only ensures fresh ingredients, but also helps to support local farmers by buying directly from them.
The restaurant is charmingly rustic with seating at tables and a long wooden bar. And before the meal, the chef himself comes out to give a rundown of what’s on offer each night and where it all came from.

“Downtown” North Truro, such as it is, only has a few businesses to speak of.
One of the newest is Captain’s Choice, an elevated seafood shack run by Chris King, a fifth-generation fisherman and Provincetown native, and the owner of Cape Tip Seafood. 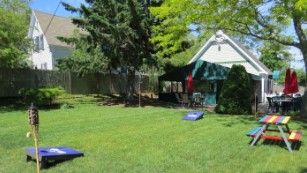 Captain’s Choice offers patio seating and a grassy lawn.
After a rocky opening season in 2015, King realized he needed to improve the food and service. So he brought in Bob and Kristi Wageman, formerly partners at Wellfleet’s Pearl restaurant, to manage Captain’s Choice, and the reviews have been glowing.
Now the restaurant is open from breakfast through dinner, serving delicious, fresh seafood from fried cod cheeks to sashimi tacos, along with an extensive beer and wine list.
King points to his ability to source the freshest seafood from his retail and wholesale business as the key to the restaurant’s success.
The atmosphere is relaxed, with patio seating and a grassy lawn for children to run around.
Finally, North Truro has a fast casual seafood restaurant that seems like it will be around for the long run.

Salty Market is located in the building that used to house Dutra’s, a market that served the locals of Truro for about a century before closing in 2013.
Ellery Althouse, son of the quirky local artist Susan Baker, and his wife Claire Adams purchased the building and opened Salty Market, which Althouse sees as returning to North Truro “a place that locals and tourists alike can go, [with] a great deli, a well stocked and interesting market and a liquor store that emphasizes local products.”
The market sells a variety of brand name and craft products, including bread from PB Boulangerie in Wellfleet, and spirits from several Massachusetts distillers such as Bully Boy and South Hollow Spirits.
There’s also a deli counter with sandwiches, salads and an excellent breakfast sandwich on a jalapeno cheese biscuit.

There have always been spots for coffee in Provincetown, but there’s never been a coffee shop like Kohi.
This small space with a backdoor view to the Provincetown Harbor opened in 2014, offering pour-overs, espresso drinks and cold brew made with beans from Portland, Maine’s Tandem Coffee Roasters.
The vibe here is more Brooklyn than beach, with particular attention paid to the various flavors of the beans they use and carefully concocted coffee drinks that are never rushed.
7 waterfront towns worth a closer look
James DeRosier, who co-owns the business with Ryan Campbell, says that their “methods are a bit more exacting in nature,” a testament to the quality of coffee they bring to Provincetown.
This past May, they opened a new restaurant called Spindler’s at the Waterford Inn in the East End of Provincetown. The restaurant, which brought on chef Barbara Lynch as a consultant, offers New American cuisine cooked with French-influenced technique.

BŌL, now in its second season of operation, was started by health food fanatic Alix Tillett, who fell in love with the concept of the acai bowl while spending time in Hawaii.
This tiny shop on the grounds of the Wagner at Duck Creek hotel offers a variety of both sweet and savory acai bowls, adding fresh berries, banana, peanut butter and beets to bowls based on the little Amazon berry.
If you’re in a rush, this is a good time to slow it down, as the menu advises that “bowls are made with love — be patient.”
Good — and healthy — things come to those who wait at BŌL.