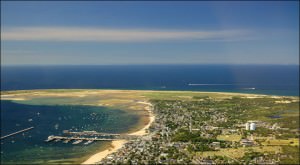 There was an interesting article in the Sunday Globe speaking to the fact that retirement housing, and housing in general on Cape Cod is more affordable after “seven down years in the real estate market have lowered prices to the point where owning a retirement home on Cape Cod is again an achievable dream for some baby boomers.”.

We are seeing variations of this in Provincetown as many  buyers are taking a solid look at their buying options after being on the fence for several years.  They feel better about the economic outlook. They feel that prices have moderated enough to warrant a second look, and they are seeing the benefits both financially and personally of buying a second home or transition to retirement home, and most of all buyers are honestly enjoying the personal adventure of looking for the home of their dreams in Provincetown and the Cape in general.

Below is the article by Globe correspondent Sarah Shemkus.

Over the past few years, however, her thoughts have again turned northward. Approaching retirement, Watkins, now 67, started thinking about buying property on Cape Cod, where she could spend half the year enjoying the beaches, natural beauty, and people of her home state.

So she kept an eye on the market, watching as prices fell and options multiplied. Then, last month, she made her move, buying a two-bedroom, three-bath ranch home on a tree-ringed lot in East Falmouth for $185,000. The moment, she said, was right.

“This is absolutely, definitely the time to buy, for sure,” Watkins said

Cape Cod, with its relatively mild weather, low property taxes, and laid-back lifestyle, has long been a desirable destination for retirees.

During the real estate boom, however, even the coziest of cottages soared in price, effectively shutting many middle-income would-be buyers out of the market. Then, the economy crashed, leaving many people worried about their jobs and their investments, and disinclined to make a major real estate purchase.

Now however, seven down years in the real estate market have lowered prices to the point where owning a retirement home on Cape Cod is again an achievable dream for some baby boomers, according to financial planners and real estate agents.

“We see prices on the Cape are low and properties are starting to move again,” said Walter Herlihy, a financial planner with Beacon Financial Planning, which has offices and Centerville and Easton.

A surge in homes for sale has helped bring prices down considerably. During the recession, many second-home owners concerned about their finances decided to sell their vacation properties. At the same time, rising foreclosure numbers meant more distressed and bank-owned homes were up for sale at depressed prices.

“A lot of folks in that age bracket can remember the 12 to 18 percent rates of the late ’80s,” said Russ Pelletier, an agent with William Raveis Real Estate in Falmouth. “So a 3 percent mortgage now is almost looking like free.”

Potential buyers are, for the most part, also feeling more secure about their finances than they were a few years ago, during Wall Street’s more tumultuous period, financial planners report. Many experienced temporary losses during the worst of the Great Recession, but most have recovered and even made modest gains, Herlihy said.

“They’ve held on through the downturn and come out ahead of the game,” said Herlihy. “People are more confident than they were.”

However, while investors may be feeling more secure, they have not returned to the abandon that marked the peak of the real estate market, said David McPherson of Four Ponds Financial Planning in Falmouth and Hingham.

“Overall, many people are more cautious than they were five or six years ago,” he said.

Nonetheless, the combination of falling prices, low interest rates, and improving financial confidence has translated into a surge of sales activity, real estate agents report. Sales of single-family homes are up nearly 30 percent over last year, according to the Cape Cod and Islands Association of Realtors.

“People who have been on the fence, waiting to make that decision, they’ve become more active because they’ve realized prices have hit bottom,” Pelletier said

And most of those buyers, agents said, are people planning to turn a second home into a permanent residence once they retire.

“Three-quarters of the sales I’ve been involved in this year are people planning for their retirement,” said Marie Kelly, an agent with Realty Executives Cape Cod in Brewster. “They’re jumping in now on their retirement home.”

For Watkins, the buyer’s market helped convince her to commit to a property in her home state, rather than in Tennessee, the other destination she had considered. Though homes in Tennessee are less expensive than those on Cape Cod, falling prices and growing inventories made East Falmouth a viable choice, she said.

“There’s more for your money right now,” she said. “The Cape is just a great place to be.”