For a year filled with anxiety and trepidation, a polarizing presidential election and talk of falling off the fiscal cliff, the real estate market in many places started to purr like a fine tuned engine. Many cities and towns throughout the country experienced substantial increases in the number of sales as well as climbing prices. In some places such as the downtown Boston market, sales and prices were up as inventory fell to low levels not seen in many years. The news on the Outer Cape was as positive and the year-end sales reports surpassed what many in the industry expected.

Single family sales in Provincetown were also very strong with 52 sales in 2012 totaling $47M vs. 31 sales for $23M in volume in 2011 – a whopping increase of 104% in volume. The average sale price for a single-family home was up 21% to an average of $912K. Provincetown leads the way on the Cape for positive real estate news and tends to follow the key downtown Boston in performance stats more than other towns on the Cape. Downtown Boston experienced a 23% increase in sales and an average increase in sales price of 5%.

An important development in Provincetown is that inventory of properties for sale has dropped by around 25% since last year at this time. For the past several years the number of condos and single-family homes for sale year after year had remained relatively stable. This market dynamic begins to build a case for spring 2013 being a historically opportune time for those sellers who have been waiting on the sidelines to put their property on the market. This evolving supply and demand dynamic may be the best for sellers in several years.

In Wellfleet, the number of sales increased 54.5% from 66 sales in 2011 to 102 in 2012 with a total sales volume of $49M, representing a 60% increase. Wellfleet is predominantly a single -family sales market too. These sales and volume increases in both Wellfleet and Truro are representative of the entire outer Cape real estate market. 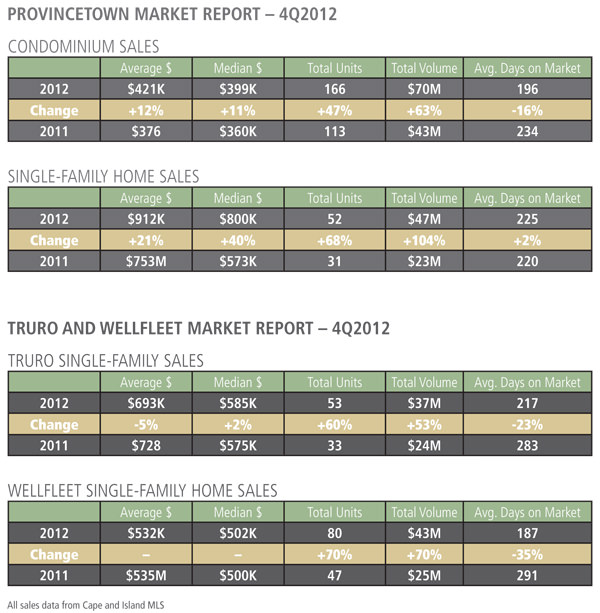 So, we have heard it from all corners…real estate is back! And nowhere is this more evident than in Provincetown and the outer Cape.

We don’t want to be accused of having “irrational exuberance,” but we are seeing and feeling buyer excitement that we have not seen in many years. But, buyers do need more choices. Sellers are more confident as well that this is the time to sell. These buyer and seller attitudes coupled with a continuation of rock bottom mortgage rates and an improving economy bode well for 2013 being a great year to jump in the market and own a piece of paradise.

Please call or stop in if you are considering selling or if you are just curious as to what your home is worth. Our business philosophy is that the best-informed sellers are the happiest and that is what we do best!