Below is Nick Timiraos’s article in the Wall Street Journal. We are certainly seeing different degrees of this dynamic in our local markets. 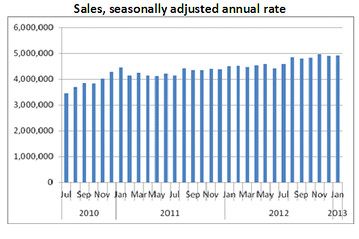 The National Association of Realtors said on Thursday what home buyers in many parts of the United States have known for months: it’s becoming a seller’s market.

After adjusting for seasonal factors, home sales rose by just 0.4% in January, to an annual rate of 4.92 million units. Still, that’s up from 9.1% one year ago.

The upshot is that there’s a growing pool of buyers chasing a shrinking supply of homes. If the trend holds, prices will keep going up. At the current pace of sales, it would take just 4.2 months to sell the current supply of homes available for sale, down from a 6.2 months’ supply one year ago.

While inventories typically increase in the spring, the Realtors’ group has expressed growing concerns that sales volumes are being held back by the lack of choice. This is good news for homeowners who have watched home prices drop over the last six years, but it’s bad news for buyers—and for anyone that makes their living selling real estate.

Inventory declines have been the most dramatic in California, Arizona, and other markets that witnessed some of the largest home price declines. Those cities have large numbers of underwater borrowers—people who owe more than their homes are worth—while many others may have equity but aren’t willing to sell because prices have fallen so far.

Investors have also been aggressive in buying up properties that are selling for less than their replacement cost. 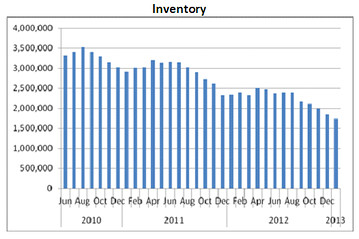 Home sales could rise to 5.2 million units this year, an increase of nearly 12% from last year, according to economists atGoldman Sachs GS +2.13%. They base their forecast on household formation and demographics, which both suggest rising demand for housing in the coming years, and affordability measures such as mortgage rates and home prices.

But the economists note that there’s a considerable amount of uncertainty that could make those targets hard to hit, particularly if there’s nothing for would-be buyers to purchase.