Great Case-Shiller chart illustrating the 2005 peak and where we are now.

By Jenifer B. McKimGLOBE STAFF

Home values in the Boston area increased by 6.7 percent in March compared with the same time last year, according to data released Tuesday by the S&P/Case-Shiller Home Price Indices, another indicator of a rejuvenated housing market.

Nationwide, home prices increased 10.9 percent compared with March 2012, according to Case-Shiller, and values increased in all 20 metro areas measured by the firm. Because Case-Shiller measures repeat homes sales, it is considered one of the best markers of the nation’s housing health. 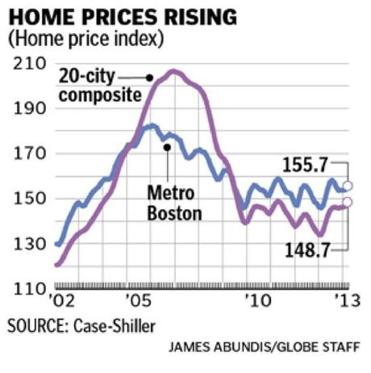 The increase in the Boston area was less dramatic than in other regions that were harder hit by the housing downfall. Between 2005 and 2009, home prices in the Boston region dropped about 20 percent, but the market has generally been more stable than the nation as a whole. Since 2009, area home values have fluctuated and now are less than 15 percent below their September 2005 peak.

Barry Bluestone, director of the Kitty and Michael Dukakis Center for Urban and Regional Policy at Northeastern University, expects steady but moderate price increases for single-family homes in the Boston area over the next few years, as more people put their homes on the market. Bluestone said he expects prices for multifamily homes and condominiums to rise even faster. “Older baby boomers are going to look to downsize and younger professionals will be less interested in moving into the suburbs and having to put up with long, tedious commutes,” he said.

Jenifer B. McKim can be reached at [email protected]. Follow her on Twitter@jbmckim.