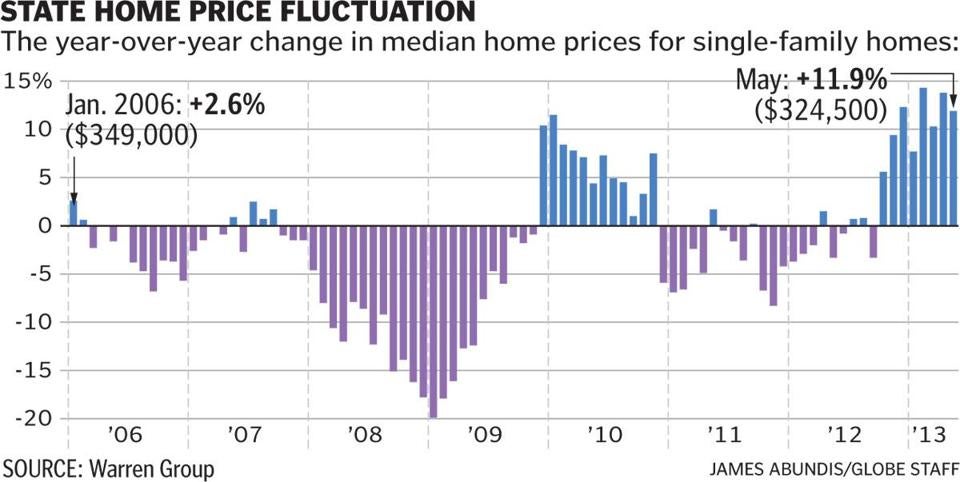 The Massachusetts housing market continued its rebound in May as the median sale price for single-family homes jumped at double-digit rates and sales reached heights not seen since 2006, according to data released Tuesday.

Home sales climbed 6 percent from May 2012, while the median home price increased by nearly 12 percent to $324,500, according to the Warren Group, a Boston company that tracks local real estate. It was the fourth consecutive month of double-digit price increases.

The housing recovery is accelerating as buyers — cognizant that home values are on the upswing — compete for a limited supply of properties, prompting bidding wars and huge increases in prices in many popular neighborhoods. Rising interest rates also are pressuring buyers to get into the market now.

While still historically low, the average rate on a 30-year mortgage has risen to about 4 percent from 3.6 percent a month ago, according to Inside Mortgage Finance, a Maryland-based trade newsletter.

“Prospective buyers have displayed a voracious appetite for real estate this year,” said Sam Schneiderman, president of the nonprofit Massachusetts Association of Buyer Agents. “Many buyers are finding themselves playing a game of ‘beat the clock’ to buy a house before rising prices and interest rates impact their ability to buy a home that they can afford.”

The recovery in Massachusetts reflects the strengthening housing market nationally as unemployment falls, incomes rise, and consumer confidence improves. The Commerce Department said Tuesday that US sales of new homes in May surged 29 percent from a year ago. S&P/Case-Shiller Home Price Indices, a well-reputed measure of the housing market’s health, reported an average price increase of about 12 percent in the 20 metropolitan areas the index tracks.

Home values in San Francisco surged 23.9 percent in April from April 2012, while Las Vegas values rose 22.3 percent, according to the Case-Shiller index. The Boston area experienced an 8.1 percent increase.

Karl E. Case, cocreator of the index, said appreciation in the Boston area appears to be moving at a sustainable pace. Home values in Boston peaked in 2005 and fell about 20 percent before hitting bottom in 2009, according to the index. They remain about 13 percent below their peak.

Case said he is concerned that other areas of the country, particularly California, may be heading toward another bubble. “There’s a bunch of exuberance out there,” Case said.

In Boston, tight inventories of homes for sale have pushed prices higher. The lack of homes on the market has also constrained sales: In the first five months of the year, sales in Massachusetts declined slightly from the same period in 2012, according to the Warren Group.

Many economists expect the strong price increases to moderate as more sellers put homes on the market and interest rates rise. “Buyers expecting home values to continue rising at this pace indefinitely may be in for a shock,” said Stan Humphries, chief economist for Seattle-based real-estate company Zillow.

Despite the improving economy and housing market, many struggling homeowners and renters are not benefiting from the housing recovery, said Eric Belsky, managing director for the Joint Center for Housing Studies at Harvard University.

The center is expected to release a report Wednesday that shows millions of US homeowners still behind on mortgages or owning homes worth less than the amount of their mortgages. The study will also note that banks are maintaining tight lender standards that are blocking would-be home buyers from loans while mortgage rates are low and prices reasonable.

“Tight credit is limiting the ability of would-be home buyers to take advantage of today’s affordable conditions and likely discouraging many from even trying,” said Chris Herbert, the center’s director of research.