Great article from Jenifer in this mornings Globe.

With nearly a year’s worth of rising prices now in the books, local housing values have rebounded to within about 11.3 percent of their last peak, in September 2005, according to the S&P/Case-Shiller Home Price Indices, which tracks repeat home sales around the United States and is largely considered one of the best marker’s of the nation’s health.

David Blitzer, managing director of the index committee at S&P Dow Jones Indices, said if the rebound sustains its current pace, Boston-area home values will likely be back to record high levels within two years.

“Home prices continue to strengthen,’’ Blitzer said. “The economy is clearly getting better.” 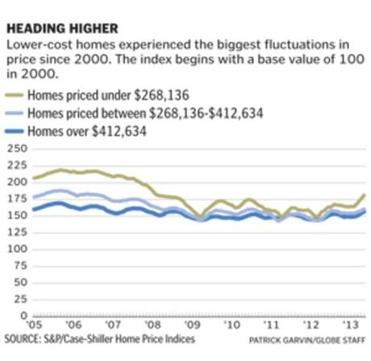 Nationwide, home values ballooned even more in May — gaining 12.2 percent compared with the same month last year, according to Case-Shiller’s report on 20 metro regions across the United States. Nationwide, however, prices are still about 24.4 percent off their historic highs, Case-Shiller reported.

Blitzer said it will probably take about three more years for housing to recover all the way nationwide — at least a year longer than in Massachusetts. “The [US] cities that went up the most came down the most,’’ he said.

As home prices escalate, foreclosures in Massachusetts and around the country are slowing, another set of data released Tuesday showed.

Statewide, foreclosure starts dropped to 245 in June, 84 percent fewer than during the same period last year, according to the Warren Group, a Boston company that tracks local real estate.

That was the lowest number of foreclosure petitions filed for any month since the Warren Group started tracking home takings in 2006, the company said. Between January and June, 2,943 foreclosures were initiated, nearly 69 percent fewer than the first six months of last year.

Foreclosure deeds, which mark the last step in the property seizure process, dropped to 329 in June, 56 percent fewer than during the same time in 2012, the Warren Group said. Between January and June, there were 1,575 completed foreclosures, about a 67 percent drop compared with last year.

Property seizures also are falling nationwide. There were 55,000 completed foreclosures in the United States in June, a near 20 percent drop compared with June 2012, according to CoreLogic, a national data tracker based in California.

“The housing market is clearly on the mend,” said Anand Nallathambi, CoreLogic’s chief executive. “But we expect the ultimate conclusion of the present housing cycle to be another several years away.”