Stable…solid…predictable…encouraging… qualities you don’t often hear when describing second home markets, but 2014 sales-to-date are just that, and in some instances downright outstanding. While in urban areas nationally we are seeing the volatility caused by low inventory and frothy prices beginning to abate. In contrast Provincetown Truro and Wellfleet real estate markets are behaving more like mature overachievers than emotional teenagers.

Year-to-date sales through the 3Q in Provincetown were strong with condos leading the market with sales increasing 14%. The average sale price of single-family homes remained relatively flat, mostly the product of lower inventory. Provincetown had a stellar summer season once the monsoon rains of spring gave way to gorgeous and dry summer weather.

The average price of single-family properties sold year to date was $1.03M down a modest 1%. There were 24 single-family sales, which was down 25% from 32 last year. Total sales volume was $25M down from $33M. We continue to feel that these softer single-family numbers are being caused by the historic lack of inventory, as buyer demand remains high especially in the desirable West End and East End neighborhoods.

The $1M plus single family market remains much slower with only 6 sales and $12M in sales volume compared to 13 sales last year with a volume of $21M.

Condo inventory as of October 19 is relatively low with only 90 available with an average asking price of $515K and an average price per square foot of $604. There are 25 condos available priced between $300K and $400Kand 22 with prices between $500K and $700K

The condominium market is tracking well higher than last years. The single-family market is tracking a bit lower. Fourth quarter under agreement (pending) sales of condos are quite strong and will bolster already impressive numbers. 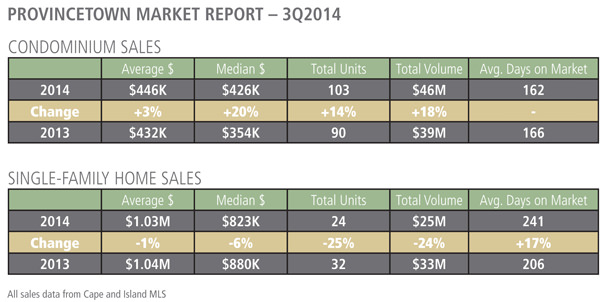 Wellfleet turned in the strongest performance with a 29% increase in sales to 62 units from 48 last year. The median sales price of single-family properties sold was up 4% to $494K from $476K last year. Wellfleet remains a predominantly a single-family sales market too.

Positive buyer and seller attitudes coupled with a continuation of relatively low mortgage rates (30-year-fixed rates are averaging 3.875%) and an improving economy bode well for 2015 being a great year to jump into the market. 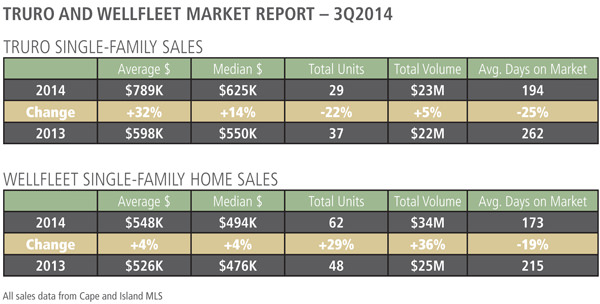 Please call or stop in if you are considering selling or buying, or if you are just curious as to what your home is worth. Our business philosophy has always been that the best-informed buyers and sellers are most satisfied with their real estate results. And that’s what we do best!